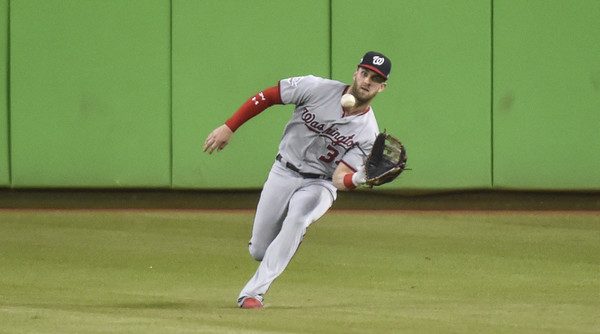 The All-Star Game has come and gone, Bryce Harper is the Home Run Derby champ, the tyranny of the American League is still ongoing, and the second half has officially begun. Will the Nationals reset, finally find themselves, and make that second-half push they’re going to need?

The Nats need to get going now, and if their start out of the break was any indication, there are a few things to be worried about. All-Star festivities occurring in the home ballpark probably didn’t help with any semblance of rest or break, especially for the three players participating in all the festivities. A break was desperately needed for this team, who looks worn down and tired. The offense can’t ever seem to scratch enough runs across the plate, and the pitchers all look worn out. The starters aren’t the elite rotation they were at the beginning of the year, and their shortened innings now are having an impact on the bullpen and is making them less effective as well. Nothing seems to be going right, and it doesn’t feel like they got much of a break, either.

Additionally, there might be a little bit of unrest and a lack of (or confusion about) leadership in the clubhouse. Max Scherzer and Stephen Strasburg had a minor confrontation after Strasburg left a lackluster return from the DL, and the two had to have a meeting in Davey Martinez’s office after the game. Ultimately, I believe this was a little spat that came out of frustration and will blow over quickly, but it’s still something to keep into the back of the mind.

It is well past the time for complacency. The season is over halfway done, and the Nationals are nowhere near where they want to be. They need to do something if they want to compete in the postseason, and there are a couple of things they can do to improve.

The first thing is easy: get guys back from injury. Ryan Zimmerman and Stephen Strasburg just returned from extended stays on the disabled list. This should hopefully give the team a bit of a spark, but again, there is no way to predict how they’ll perform for the rest of the season, and fans can only hope. Sean Doolittle will return from injury soon, as well, and getting the closer back will absolutely be a boost.

Additionally, there is a small chance some long-term residents on the disabled list could return. Koda Glover has been making a couple of rehab appearances and is working his way back. Joe Ross has begun throwing. Remember Joaquin Benoit? The veteran bullpen arm the Nationals signed in the offseason that was supposed to shore up the relief core who went on the DL before the season started and has yet to pitch in a Nationals uniform? He could perhaps make an appearance sometime this season. In no way are any of these players guaranteed to pitch again this season, let alone make an impact, thus they shouldn’t be relied upon, but it’s definitely something to tuck away for future reference in case it becomes relevant.

There are a lot of things that could be improved, but one position that sticks out like a sore thumb: the catching position. The Nats catchers have had abysmal offensive production this season. Pedro Severino hit .171 when he was with the club, Matt Wieters has hit .207, and Spencer Kieboom has hit .211. The three of them have combined for 5 home runs and 27 RBI. Wieters has been great at working with the pitching staff behind the plate, particularly with Gio, but the offense at that position is a black hole. An upgrade at that position offensively would be just short of a godsend, and there are two All-Star catchers in Florida who would fill the hole very nicely.

J.T. Realmuto is hitting .313 with 12 home runs and 45 RBI, and is wasting away in Miami. His bat would be much welcomed by Nats fans. Perhaps even more welcome would be Wilson Ramos, the longtime Nats catcher currently hitting .297 with 14 home runs and 53 RBI for the Rays (though also sitting on the disabled list). There is no guarantee that deals for either of these catchers would happen, given the huge price the other teams would ask for. Personally, I don’t want to give up Victor Robles or Carter Kieboom as much as the next person, but gosh would it be great to watch some offense again. I don’t know if the front office will do anything big, but something would be nice.

The Nats need to get going now. There are a number of problems, but there are also a few ways to try to remedy them. There is no guarantee it will actually do anything, but if they want to save the season, they need to rally and something needs to change.