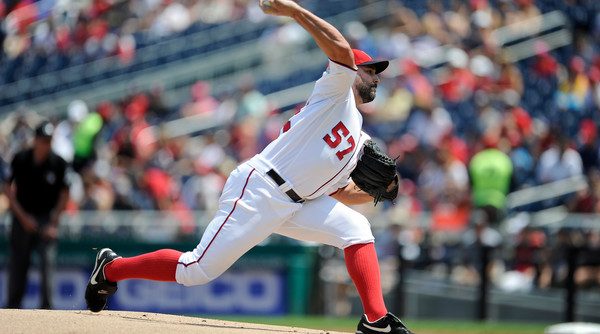 Heading into the All-Star break, Tanner Roark was in a rut.

Across his previous 10 appearances (nine starts), Roark was running a 7.11 ERA, with hitters mashing to the tune of a .963 OPS against him. An unlucky .394 BABIP was likely fueling the firestorm, but the righty simply was not locating his pitches well enough, as evidenced by the 24 walks compared to just 40 strikeouts across 49.1 innings pitched. He was falling behind in counts and giving up hard contact way too often. On the season, Tanner’s ERA stood at 4.87, hardly the type of production the Nats needed with Stephen Strasburg perpetually injured and Gio Gonzalez also struggling to get hitters out.

Roark clearly needed a reset, which the All-Star break provided. He had 11 days of rest between starts, allowing him to take a step back and see where he could improve. This article from Byron Kerr of MASN Sports provides great insight into what Roark did to strengthen his approach heading into the second half: go back to relying heavily on his sinker, as he did during his fantastic 2016 campaign.

Ironically enough, the fellow pitcher who pointed out the flaws in the way Roark was throwing his sinker in 2018, Brandon Kintzler, no longer plays for the Nationals. Based on Kerr’s insightful piece, I’m not seeing how Kintzler could have been an issue in the clubhouse, but that’s a topic for another day. We’re here to talk Tanner.

The righty’s three starts since the break are obviously a small sample size. But the jump in sinker usage and effectiveness leaps out at you, as does Roark’s decrease in offspeed pitches.

Leading up to his July 25 start against the Brewers, Roark was throwing his sinker 38.58% of the time this season, according to the incomparable Brooks Baseball. That usage has taken a leap up to 45.14% since the break. In addition, Tanner has employed his four-seam fastball more often. Prior to the break, Roark was chucking it 17.16% of the time. Since then? A 24.65% usage.

As one may assume, this has coincided with less reliability on offspeed stuff. His changeup usage is down nearly six percentage points. The slider and curveball have seen nearly three-percent decreases, while Tanner has basically stopped throwing his cutter altogether. He’d thrown 59 cutters on the season before the midsummer classic took place in DC. In his three starts since, he’s thrown just one.

Modifications to what Roark was doing with his back leg in throwing the sinker were recommended by Kintzler, another pitcher who relies heavily on the pitch, now in service of the Chicago Cubs. According to Kintzler, Roark was sinking into his back leg, in turn not using his lower half to peak effectiveness. Kintzler and pitching coach Derek Lilliquist worked with Roark on getting his back leg to “generate more power”. The mechanical tweak has paid major dividends.

While the strike percentage on the sinker has essentially stayed static, hitters are swinging and whiffing at the pitch much more often. The pitch was generating swings 40.77% of the time before the break; that number is at 56.15% since. The whiff rate has gone from 3.98% to 8.46%, a healthy jump that indicates Roark’s adjustment is leading to much more deception in the sinker. As we all know from watching Tanner over the years, the movement on the pitch is essential to no. 57 generating swings-and-misses and weak contact.

When you look at Roark’s zone profile against righties before and after the midseason intermission, you will notice that he’s jamming them more often, in addition to locating the pitch at the bottom of the zone at a higher rate. As for his approach against lefties, he’s doing a much better job of keeping the sinker away from the middle and inside of the plate, where southpaw hitters can do much more damage to it. Take a look at this chart, then this one, and you’ll see what I mean.

While Roark’s four-seamer isn’t as big of a story in his recent surge, he’s finding the strike zone a lot more often with it. The Illinois native was throwing the fastball for a strike just 18.81% of the time before the break, but in his 22 innings since, he’s generating strikes with the fastball at a 32.39% clip.

Across all pitch types, Roark is throwing a strike 69% of the time in his last three starts. Prior to his recent success, Tanner was hitting the zone at 62% rate on the season. There’s absolutely no doubt that something has clicked for the hard-working right-hander.

Roark’s dominant stretch in which he has given up two runs while striking out 20 and walking just one has come at an ideal time. The Nats are still without Strasburg and now find themselves in full-on desperation mode in a push for their fifth playoff appearance in seven years.

Although we’re only looking at three starts, we’ve seen Tanner have extended periods of excellence before. If the dude with the ever-changing facial hair and peak dad bod can continue to pitch this effectively, it could go a long way towards the Nats playing in October.

All statistics courtesy of Baseball-Reference.com. All detailed pitch information courtesy of Brooks Baseball.