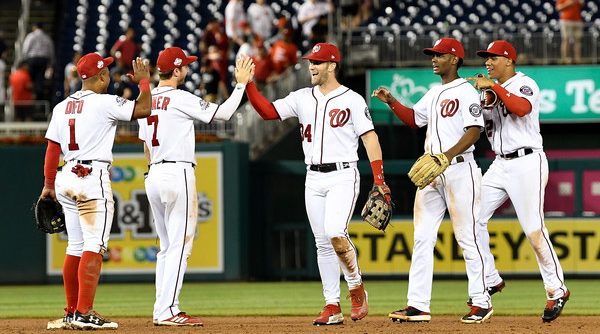 On Monday, in a meaningless display of athleticism that was witnessed by a select few, Bryce Harper took ground balls at first base, a position he does not, and has never, played.

Harper, in the short clip MASN showed before Monday’s game, looked fine playing the position one of my high school coaches once claimed could be manned by a trained monkey, but the fact that he’s taking ground balls there at all is exciting.

As we sit here in early July, the Nats outfield is a strength. Adam Eaton’s return bumped a red-hot Michael A. Taylor out of the everyday lineup and onto the bench where he’s struggled to find at-bats (and rhythm). Juan Soto has been a revelation, of course, and Harper has been, well, struggling. He can’t be benched, though, and Soto doesn’t deserve a demotion to get Michael A. at-bats. In his last full season, Eaton was a nearly 6-win player. Of the four of them, Michael A. is the odd man out.

Except, why do we have to limit this discussion to the outfield?

By FanGraphs WAR, the Nats’ first baseman unit of Ryan Zimmerman and Matt Adams (and Daniel Murphy, but he’s only played of late) have been the 10th worst in all of baseball. Both those guys are hurt, obviously, and while Adams has a clear timeline for his return, Bryce’s bat is better. Plus, Bryce has become a three-true-outcome guy and that plays well in the corners of the outfield or at first base.

Perhaps better at first base.

In 2012, Bryce Harper was a plus defender. That bears noting because in the five years since, his defense has atrophied to the point where FanGraphs ranks him the ninth worst defensive outfielder thus far in 2018. And now he’s starting in centerfield, the most difficult of the OF spots. Compared against Michael A., one of baseball’s best defenders, this difference is stark.

FanGraphs gives both Harper and Taylor 1.3 WAR this year, seemingly unable to pick a side in the debate, while Baseball Reference is much more clear: Taylor’s 1.7 WAR blows Harper’s 0.5 out of the water.

So while it’s unlikely Harper becomes a fixture at first (Davy said, “I don’t know if he’ll start a game there”), he might log some innings there when Taylor comes in as a defensive replacement. That’s fine. It just won’t be as fun as letting Harper play there full time.