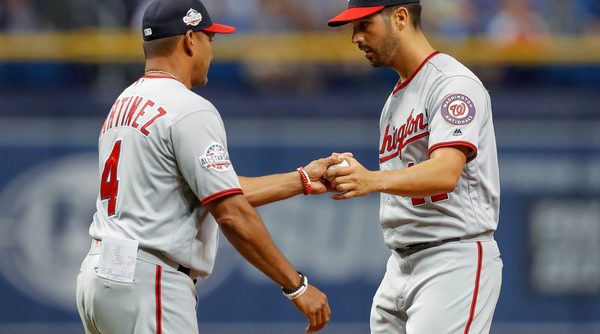 For the majority of the 2018 season, the starting pitching has been the rock. The one thing the Nationals could rely upon when all else faltered (which it has, many a time). However, that rock hasn’t been so steady as of late.

Maybe it’s a midseason funk. All teams and staffs have bad stretches. Maybe it’s overuse. Davey Martinez has leaned on his starting pitchers heavily since the season began, and it kind of looks like we’re starting to see the effect of that on the mound. The Nationals starting staff has thrown more innings and more pitches than anyone else in baseball. Max Scherzer, Tanner Roark, and Gio Gonzalez are all near the top of the list in pitches per game and innings pitched, and it could be starting to take a toll. The three of them look a little gassed.

It also does not help that Stephen Strasburg and Jeremy Hellickson went out with injury at an inopportune time. Having two-fifths of your elite starting rotation out does not help the workload of the other three starters, puts more work on the bullpen, and puts a lot of pressure on the starters tasked to fill in during their absence. It’s been a bit of a struggle. Since Strasburg went on the disabled list on June 10th, a starter hasn’t gotten a single win.

So, what’s the problem? Well, a good chunk of it has to do with a lack of offensive production and run support. Since June 10th, Scherzer has not allowed more than two runs in a start, but in four games he is 0-3. The team was shut out in every single one of those losses. Despite not being able to get a win for himself, Scherzer’s ERA has not fluctuated that much, and is currently at a very nice 2.04. He’s not the problem.

The other starters, however, are a different story. They’ve struggled. In his last four starts, Roark has an ERA of 6.20, letting in three, four, six, and one earned runs. He’s struggled a little bit with his command, walking 11 in 20.1 innings. He’s also letting up the long ball, giving up 4 in that span. To further the issue, he’s throwing a lot of pitches. 106, 97, 113, and 107. Roark in particular has always been a bulldog who can handle a big workload, but at what point does it become detrimental to his game? Regardless, the offense needs to score more runs in his starts: 0, 6, 2, and 3 runs in the last four games, all losses for Roark. Six runs would usually be enough, and the 12-2 game he started and gave up 6 runs in probably wasn’t winnable anyway, but Roark’s last few starts probably would not be considered that bad if the Nats could put together a little run production and score more than two runs a game, if that.

Gio has fared no better. Worse, probably. He was subject to a horrible outing in Tampa his last game that saw him leave after the first inning of an eventual 11-0 beating in which he gave up 6 runs. He has only had three starts since June 10th (currently next scheduled to pitch on Sunday), so his numbers since then are really not great. 10.64 ERA in 11 innings, giving up 13 runs, walking 7, striking out 7, and giving up 4 home runs. His ERA shot up from 3.08 to 3.68 after the Tampa outing. He’s been struggling to get through innings, and he’s having trouble with control and finding his game. It’s a little painful and heartbreaking to watch. Gio is an emotional guy, and I really think he’s having a little bit of trouble without Matt Wieters behind the plate. As good as Pedro Severino has been with the pitching staff as a whole, his high energy and enthusiasm is not what Gio needs when he’s in trouble and in his own head. Wieters was such a calming presence to Gio whenever they were working together, and I don’t know exactly what it is about Wieters in particular or what he would say to Gio, but he’s some kind of security blanket or magic Gio-whisperer who calms him down significantly when he starts to freak out, and Gio, emotional guy that he is, has attached himself to him. And it shows up in the stats, too. In five games (28 innings) with Wieters, Gio has a 2.25 ERA, .208 BAA, and has only given up one home run. In 7 games (33.2 innings) with Severino, he has a 5.35 ERA, .291 BAA, and six home runs given up. There are certainly other factors going into these stats, but it’s a noticeable difference. I think Matt Wieters needs to give Gio a big hug and a little chat between every inning, it certainly can’t hurt. Some run support wouldn’t hurt either, but a pep talk from Wieters seems much more attainable at this point.

Will this get better? Yes. Strasburg will return at some point and lift some of the burden off the other three, and Scherzer will soon become Mad Max and just let it loose, he’s not one to let a personal losing streak linger. But are the trends worrisome? Still yes. The starters probably need a bit of a lighter workload, and the recent addition of Kelvin Herrera to the bullpen will definitely help with that. But for that to happen, the starters need to feel confident, and the offense needs to score runs. Please score some runs. The pitching staff can’t help you win if you don’t score at all.