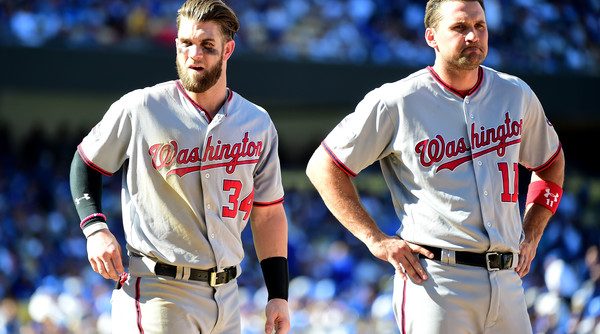 Ryan Zimmerman was one of the worst everyday players in baseball in 2016. As a proud owner of a vintage Zimmerman “Natinals”-era shirsey, it pains me to admit that. But it was true. Yet 2016 is over and the 2017 season is right around the corner. Is there any hope that Zimmerman can turn things around?

After starting slowly, Zimmerman has been on something of a Spring Training tear lately. As Michael A. Taylor has taught Nationals fans year after year, Spring Training stats don’t always lead to regular season success. And for as hot as Zimmerman has been as of late, Zimmerman’s 2016 was even colder. He hit only .218/.272/.370, an offensive output over 30% worse than league average by wRC+. As a result, he earned a -1.3 WAR in 2016. Essentially, the Nationals lineup would have been better if Dusty Baker had penciled in a run of the mill minor leaguer in at first base everyday instead of Zimmerman.

Those surface stats are obviously bad but they are supported by some disconcerting trends in the underlying metrics. The normally patient Zimmerman started chasing pitches out of the strike zone at the highest rate of his career in 2016. That resulted in the lowest contract rate and highest swinging strike rate Zimmerman has ever posted. As a result, Zimmerman’s walk rate dropped to a paltry 7% while his strikeout rate jumped to over 22% on the season.

The go-to stat for anyone looking for a Zimmerman rebound comes from the new Statcast system: exit velocity. Thanks to the wonders of modern technology, MLB teams can now measure the speed of every batted ball. Turns out, hitting the ball harder results in more hits. And Zimmerman hit the ball hard in 2016. In fact, he had the 14th highest exit velocity in all of baseball, similar to guys like David Ortiz, Nelson Cruz, and Giancarlo Stanton. How could Zimmerman be hitting the ball as hard as some of the premier power hitters in baseball but be one of the worst hitters in the majors?

Turns out Statcast has an answer for that too: launch angle. The fancy radar system that tracks exit velocity can also track the angle a batted ball takes off the bat. A high launch angle results in a pop up, a low launch angle is a ground ball and a line drive is somewhere in between. Zimmerman’s launch angle in 2016 was less than ideal. Instead of hitting the ball hard at a useful angle, Zimmerman hit the ball hard right into the ground. That’s why Zimmerman ran a BABIP of .248. He wasn’t on the bad end of some bounces; he was just constantly whacking the ball into the ground.

Of course, Zimmerman has been through a rash of injuries over the last several years. By playing in only 115 games last year, Zimmerman set a three-year high in games played. That certainly does not mean he was absolutely healthy in playing those 115 games. His previous shoulder injuries are still a concern, as evidenced by whatever you call the throwing motion he has had to adopt. On top of that, he’s struggled with plantar fasciitis as recently as Spring Training of 2016. That’s an injury that can potentially take years to fully recover from. It’s certainly plausible that a bad foot could keep Zimmerman from creating loft on his batted balls. Nationals’ fans should probably hope that is the case, and that Zimmerman is final healthy for 2017.

Unfortunately for the Nationals, the early returns on Zimmerman’s 2017 may not be very helpful. March/April has historically been one of the worst month for Zimmerman offensively, better only than June. If Zimmerman struggles out of the gate, is it his normal slow start to a season? Or is it a continuation of his 2016 struggles? Dusty Baker will have a tough decision on his hands if Zimmerman doesn’t continue his hot hitting Spring Training into the regular season. Baker has the ability to go full platoon, letting Zimmerman face left handed pitchers while giving most of the first base at bats to the recently acquired Adam Lind, a hitter who specializes in hitting right handed pitching. If the Nationals want to get more creative, they could shift Daniel Murphy to first base and give more at bats to the likes of Stephen Drew or Wilmer Difo at second base. It may be hard for Dusty, normally deferential to veterans, to bench the former face of the franchise but if Zimmerman can’t turn things around, he will need to.