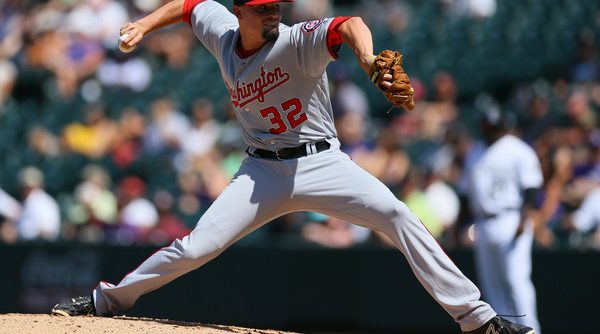 The Washington Post’s Chelsea Janes wrote a nice piece yesterday about the difficult bullpen choice the Nationals will have to make as Spring Training winds down. She notes that the team already has five spots locked down for guys on MLB contracts (Joe Blanton, Oliver Perez, Shawn Kelley) or established contributors (Blake Treinen, Sammy Solis). That means if the Nats want a long man, either hotshot rookie Koda Glover or fireballing lefty Enny Romero will be left out — which would almost surely mean a new team for Romero, who is out of options. Janes also quotes Dusty Baker as saying the Nationals need a long man and Mike Rizzo as saying they don’t.

It’s an informative article, but it fails to answer its titular question: Do the Nats need a long man?

We can start to answer this question by looking at the Nationals’ long man from last year: Yusmeiro Petit. Was his ability to go multiple innings indispensable? At first glance, it seems the answer is no.

In his 35 relief appearances — we’ll get to his lone start in a moment — Petit pitched over two innings just five times. That’s less than once a month that Petit was asked to do something beyond what a traditional short reliever could reasonably be expected to do. Multi-inning outings by middle relievers and setup men are far from rarities: The other seven relievers mentioned above combined to pitch at least two innings 28 times last season, with only Kelley failing to do it even once. Between the seven of them, they could easily pick up Petit’s multi-inning burden whenever the need arose. And with seven potential late-inning pitchers, the team can afford to stay away from relievers who had to go long.

But Petit’s lone start should not be overlooked. On extremely short notice after Stephen Strasburg was scratched, he pitched six capable innings. Patching those innings together from two or three setup men would decimate the bullpen for the next few days. Moments like those, while rare, constitute a serious portion of the value a long man brings.

However, a new rule change gives teams more flexibility to adapt to those situations. By shortening the minimum disabled list stint from 15 to 10 days, Major League Baseball has allowed teams to clear a roster spot by putting a pitcher on the DL while only causing him to miss one start. If there is any doubt about a starter’s availability for a given start, the team can prepare to call up a minor league starter just in case. If the pitcher indeed can’t go but is expected to be available for his next start, he can be placed on the DL retroactive to the day after his last start. Part of the new DL rule is that a placement can only be backdated three days, so the team will have to decide if a pitcher can make his next start within that time frame.

The minor leaguer takes the injured pitcher’s turn in the rotation, and if the pitcher returns to health for his next start, he can reclaim his rotation spot with his second start moved back just one day. If the team has a day off in that span, the rotation is not disturbed at all. (Note: I actually did the math for this, and for any given game, there’s a 82% chance that the team has an off day in the next 10 days.) If the team does not, the minor leaguer would have to make another start before the injured pitcher returns and pushes everyone else back one day.

This is a minor step down in convenience from having a long man, but it is much more palatable than a pitcher missing 2-3 starts under the old DL length. It still provides no recourse if a starter is scratched out of nowhere on his start day, but that fringe scenario is a small price to pay for the benefits of having seven quality relievers instead of replacing one with an uninspiring veteran like Vance Worley or Jeremy Guthrie.