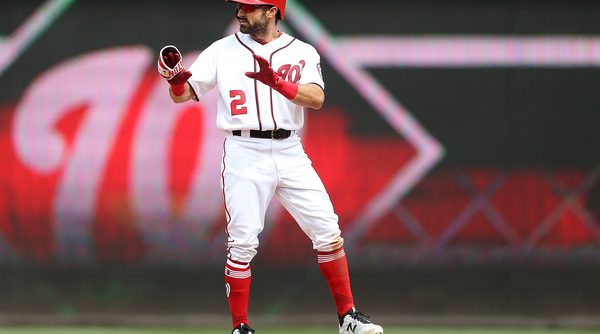 By now, the name Andrew Stevenson is one that should be familiar to Washington Nationals fans. In less than two years, the former top pick has eased through the organization’s ranks and has made his way to Triple-A Syracuse. Given recent developments in the majors, there is reason to believe that it will not be his last stop this year.

Though he does not come with the hype of his peers in the farm system, Stevenson in many ways exemplifies what an organization should want from its prospects. Since being selected with the 58th overall pick in the 2015 draft, he has used his solid contact and on-base skills to make progress at the plate, while flashing impressive speed and range in centerfield.

This has resulted in a steady progression through the farm system that continued earlier this week, when Stevenson was promoted to Syracuse. Prior to his latest jump, Stevenson put together solid totals at Double-A Harrisburg—batting .350/.429/.438 in 91 plate appearances over 20 games.

The production speaks for itself, and Stevenson will now look to translate that success to the minors’ highest level. If he does so, his prospect status is one that will be discussed even more in the coming months, especially given what has happened to the Nationals’ outfield situation. The season-ending knee injury to Adam Eaton leaves some questions about center field, where the Nationals are for now counting on Michael Taylor to pick up the slack.

Taylor — himself a once-highly regarded prospect — could use the opportunity to deliver on a potential that has long intrigued observers. If he struggles, however, it will raise more uncertainty about how the Nationals proceed for the remainder of the year, and gives Stevenson a chance to be a factor in one of a few scenarios.

Stevenson would be a very convenient call-up option if the Nationals decide to address centerfield internally. At worst, the left-handed hitter would be a competent platoon option or defensive replacement who can be called upon to steal a base in a key situation. At best, he would ease into the majors and prove to be a capable hitter who played a strong defensive centerfield.

The other scenario, and perhaps the one that will be the most discussed in the coming weeks and months, is one in which the Nationals look for outside help.

The loss of Eaton for the year leaves multiple holes. It takes away an effective top-of-the order hitter, and a solid defender — a skill set that the Nationals have always coveted in a centerfielder, but with the exception Denard Span’s time with the team, have never quite found. Making up for the production Eaton likely would have provided over the course of the year will not be an easy task on the trade market, but doesn’t mean that the Nationals won’t explore their options.

Should the club move forward with trade discussions, does Stevenson become a player that gets packaged in a deal? Time will tell, but consider that there is a tendency for an organization’s best prospects to surface in trade rumors. There are a handful of players—right-hander Erick Fedde, outfielder and top prospect Victor Robles, and perhaps even rising outfielder Juan Soto — that are bound to be named in various reports, and Stevenson’s status as a former top pick at a high level of the minors likely keeps his name in that conversation.

Stevenson entered the season as a highly-regarded prospect, and seemed bound to continue his ascent this year. Now that he has been promoted once again, he could prove to factor into decisions made for the major league roster one way or the other.