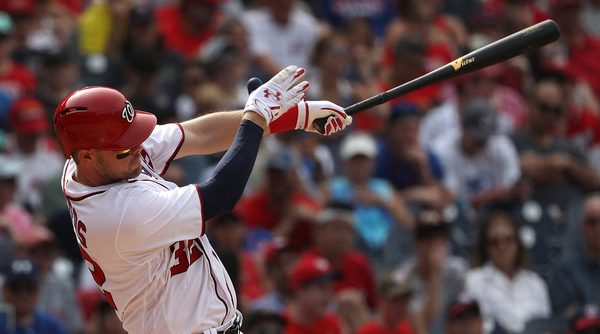 Matt Wieters was supposed to save the Orioles.

He was the top prospect in all of baseball coming into the 2009 season. Baltimore called him up to The Show after only a year and a month in the minors – an extremely short period of time for a catcher considering the defensive intricacies of the position – and thrust him under the weight of enormous expectations. For the next 7+ seasons, Wieters was an above average player for the O’s. Yet when you’re expected to be great, good is a disappointment. And so, the O’s management let their former Golden Boy walk after another solid, albeit unspectacular, season, leaving him to search for his next team.

Wait he did. The offseason came and went. Wilson Ramos found a new home, despite his knee injury, and Wieters had no takers. The Nats even traded for another catcher, their former prospect Derek Norris, before signing Wieters to a bargain-bin two-year deal with an opt-out after one two weeks into spring training. Having to wait so long to find someone who wants you had to be tough for the former first-round draft pick.

Wieters was taken 5th overall in the 2007 draft – before Madison Bumgarner, Jason Heyward, and one spot before Ross Detwiler was drafted by the Nats. Rushed to the majors after obliterating minor league pitching, the sky seemed like the limit. However, it took him a couple years to really hit his prime. He was good but not great as he balanced the responsibility of handling a major league pitching staff and hitting major league pitching.

Things began to click for him at the plate in his third year. From 2011-2013, he was the 5th most valuable catcher in all of baseball. He hit over 20 homers each year, and slashed .249/.315/.434 with a wRC+ of 101 during that stretch. He made two All-Star games and won two Golden Gloves in that three-year period. Still, he was good but not great. As a league-average hitter with power and an above-average defender, Wieters proved himself to be a valuable major leaguer. But when you’re the best prospect in baseball, more is expected. So, when injuries hit in 2014 and 2015, his shine completely wore off.

Not wanting to invest in him long-term, the O’s offered Wieters a one-year Qualifying Offer after the 2015 season. Thinking he’d turn it down in pursuit of a bigger/longer deal, the QO would fetch them a top draft pick as compensation for his loss. Instead, he did the unexpected and became the first player to accept such an offer, giving him another year with a team that may or may not have wanted him.

He stayed healthy in 2016, but his numbers fell off. His 88 wRC+ was similar to his 2013 season. But his defensive metrics dropped significantly, leaving him with only 1.7 wins over replacement – down from his 4.4 WAR high-water mark in 2011. For a catcher, that’s not’s bad. But for a former top prospect, it’s disappointing. Good but not great. And thus ended the Baltimore chapter of the Matt Wieters story.

As the Nats/O’s series (rivalry?) progresses, Wieters represents the biggest name to switch teams thus far. A late-arriver to training camp and tabbed to replace fan-favorite Wilson Ramos, Wieters found himself in another less-than-enviable position. Ramos was the best hitting catcher in the league last year with a wRC+ of 124. Wieters has never topped 110 for a full season. Ramos is still beloved by the fan base (full disclosure: my Vamos Ramos tee shirt is the first shirt I wear post-laundry). He left a huge hole in the organization both on and off the field. The Nats’ Front Office certainly doesn’t expect Wieters to fill that void alone, as evidenced by the Adam Eaton trade, but it’s easy to draw one-to-one comparisons when guys play the same position.

Wieters has embraced the challenge and is off to a great start, sporting a 118 wRC+ after the first month-plus of year. Eaton was acquired to replace Ramos’s production, but Wieters was brought in to simply fill a hole. He just needs to surpass Danny Espinosa (and his 79 wRC+) to keep the offense rolling. A big reason the Nats’ offense started so hot is that there were no gaping holes in the lineup with Wieters and Eaton in it. No longer asked to hit in the heart of the order, Wieters has kept the line moving hitting 8th. His batting average is up over 40 points from last year and his on-base and slugging percentages are up over 60 points. He’s being patient and taking more walks hitting in front of the pitcher, but he’s also driving the ball much better than he ever has. His .476 SLG and .365 OBP entering the Baltimore series would be career bests. His steady presence is holding the lineup together and allows the team time to figure out the centerfield position with Eaton out. Zimmerman’s other-worldly start to year is more than making up for the loss of Ramos even with Eaton out, but Wieters is making himself into an option to hit higher in the lineup should Dusty see fit to do so.

Matt Wieters: good but not great. Unlike Baltimore, that’s all DC expects of him. Finally, for the first time in his career, he’s not only meeting expectations – he’s exceeding them.