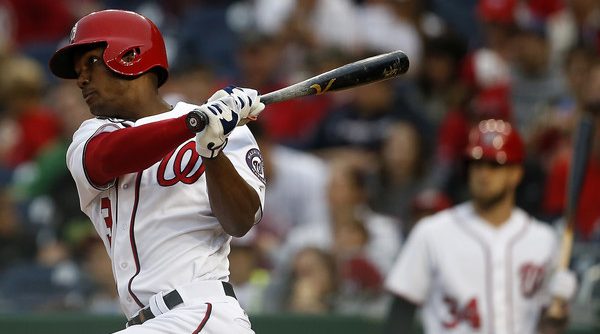 Like good Washington sports fans, Nationals faithful are panicking. This week, like most weeks this season, the hot takes, angry tweets, and general unrest centers around the much-maligned bullpen. But take heart, folks! I’m here to tell you that the bullpen is not actually the Nationals biggest hindrance in making a playoff, but in fact, there’s something else to lose sleep over: Centerfield!

Since Adam Eaton went down, The Nats Blog has talked about an out of the box option and mentioned the most likely prospect option to fill the hole. But both of those assume that the solution is internal. Yes, there are some options within the organization currently, including:

But let us pretend for a moment that Taylor, with his career .228/.280/.305 triple-slash line, does not cut it as a regular (shocking, I know), and Mike Rizzo and company decide that their young prospects are not ready. Can the Nats suck it up and have an offensive black hole in center, like they did for most of 2016, and still accomplish the ultimate goal of winning a World Series? Good news for those who want to lament the Curse of Washington Sports this week: the answer is likely no.

As a history buff, I thought it would be a fun experiment to see who roamed centerfield for the last five World Series Champions. Here they are with some notable stats:

For reference, a league average OPS+ is 100. Each of the previous five winners of the World Series not only had a competent centerfielder, they had a good, sometimes great centerfielder. The Nationals and Rizzo recognized and filled this need when they brought in a true elite CF option in Eaton. With him out until 2018, it is time to move on. The Nationals need to recognize that Taylor has proven that he is not able to play at even a league average level. Once again, they must go outside the system and into the trade market to fill this hole. The price, however, will likely not be easy to stomach.

Tops on a list of two reasonable options is a guy already mentioned: Royals CF Cain. This possibility has been discussed often in baseball circles, and it makes sense. Cain is a true rental with his contract ending in 2017 on a team that almost certainly will be selling. He will be expensive, though, and if Kansas City does indeed decide to move him this summer, the Nationals will not be the only team pursuing him.

The second compelling option is another expiring contract: Carlos Gomez of the Texas Rangers. Gomez has not produced to the level of the Championship caliber centerfielders I mentioned, but he is certainly an upgrade over Taylor.

Best case scenario for the Nationals? Taylor gets hot, starts to hit for power like we know he can, and a team like KC finds interest in him. This is improbable, but doubting the genius of Rizzo’s trade ability has proven to be a fool’s errand.

Now granted, things may not be as dire as they seem. Above average production is expected from a middle infield of Daniel Murphy and Trea Turner, which should cover some of the usual production from most team’s centerfielder. The point is this, though: This offseason, Rizzo saw the hole in center as much more pressing than the hole(s) in the bullpen. With that problem no longer solved for 2017, do not let the bullpen woes take away all your attention from what could be the bigger issue.