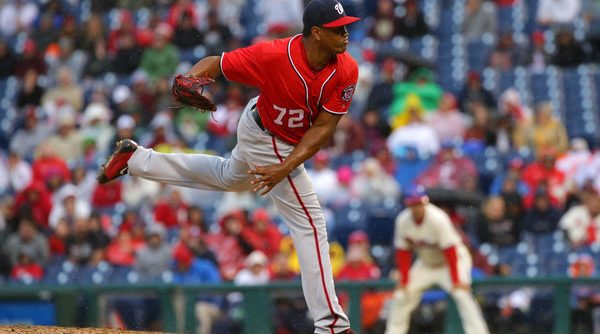 With every day, and from both sides of my intelligence, the moral and the intellectual, I thus drew steadily nearer to the truth, by whose partial discovery I have been doomed to such a dreadful shipwreck: that man is not truly one, but truly two.

My dear reader, imagine — if you will — two pitchers. Both are fireballing lefties, capable of touching 100 MPH, and both are relatively young. But the similarities end there. You can find their stat lines below:

For Pitcher A, it seems like a miracle he’s made it in the majors too far. He has all the worst traits of a pitcher with bad command: a lot of walks and a lot of hard-hit balls. That BABIP is pretty high, but it seems like he just lets people hit the ball hard off him. Imagine Gio Gonzalez at his very worst, but all the time.

Pitcher B, meanwhile, seems like a pretty reliable high-leverage reliever. He has a league-average walk rate and above-average strikeout rate, plus he limits hits. Again, you’d think that BABIP means he’s been lucky, but that’s a big sample size. Perhaps his overpowering fastball helps him get weak contact. Another lefty who throws 100, Aroldis Chapman, has a career .286 BABIP against.

Your first reaction to these numbers might be that it’s all just luck. Homers are fluky, and those BABIPs are so unsustainable. But over such a large sample — 147 home balls in play, 127 road balls in play — it’s unlikely that the difference is wholly attributable to random chance. Using a z-test for statistical significance (a flawed metric here because it assumes all batted balls are created equal, but useful for a demonstration), the difference between those two BABIPs is significant at a 95% level. That means that if Romero’s true-talent BABIP were the same at home and on the road, there would only be a 5% chance we would see the difference between the two that we have seen.

Additionally, Romero’s walk rates, generally considered much less of a product of chance, are massively different. FanGraphs says walk rate stabilizes at 170 batters faced for pitchers, and Romero has faced 241 batters at home and 192 on the road. The fact that his home walk rate is 67% higher than his road walk rate should be incontrovertible proof that Romero is a fundamentally different pitcher on the road.

Not convinced yet? These differences are even more pronounced than they seem. Since players perform better at home, Romero’s stats would be better at home even if he were equally talented at home and on the road. Not only does Romero erase that effect, he goes far past it.

It’s unclear what this could stem from. Romero made his debut at home in 2013 and had a fine outing, allowing one hit over 4 2/3 innings despite four walks and no strikeouts. Perhaps he simply hated the Rays’ Tropicana Field: All of the above effects are from Romero’s time in Tampa Bay. In fact, he has not shown his usual splits in 2017, as his strikeout rates are nearly identical, while his BABIP and walk rate are actually higher on the road. But this early in the season, it’s hard to draw conclusions based on these statistics.

Thus far this season, Romero has thrown 10 1/3 innings (49 batters faced) on the road to just 5 2/3 innings (25 batters faced) at home, though the Nationals have played one more home game. Is it possible the Nationals have picked up on this trend, or that Romero has expressed to his coaches that he is more comfortable on the road? This early in the season, I’ll say this is likely due to random chance, but it’s something to keep an eye on.

Based on the evidence stated above, I truly do believe Romero has been more comfortable on the road. I have absolutely no insight as to why that could be, and most crucially, I don’t know whether his discomfort was linked to the Trop or whether it’s home stadiums in general. If his problem was Tampa, then the Nats could have a steal on their hands. If it’s any home park, then he might keep pitching two thirds of his innings on the road. And if this home effect is just random chance, then Romero may not be long for this roster.

But whether or not Romero’s Jekyll and Hyde are indeed two separate people, he has demonstrated his capability of being an elite reliever, and the line between dominance and mediocrity is very thin.

“Good and evil are so close as to be chained together in the soul.”