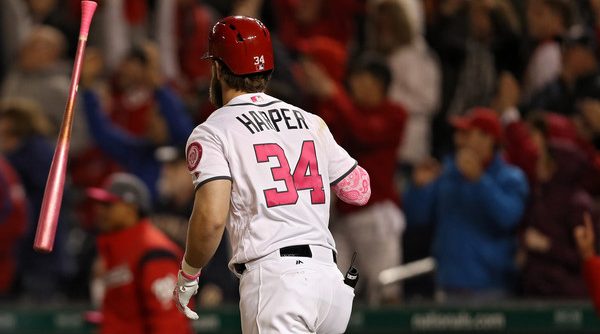 At about 2:30 p.m. Saturday, your phone might have been buzzing off the table with notifications of Bryce Harper and the Nationals agreeing on a $21.65 million deal to avoid arbitration for next season. It’s the largest deal for an arbitration-eligible player in MLB history because Harper and big numbers go hand in hand.

Big numbers like two walk-off homers against the Phillies in the last month. Harper sent his bomb out on a 0-1 pitch, straight out to centerfield to land atop of his big pile of money like the cherry on top it was.

Harper emphasized the shot with a bat flip, of course.

But, always looking for ways to revolutionize baseball, Harper also shooed Edubray Ramos off the field as he rounded third.

Rounding third, Harper made a “get off the field” gesture at the pitcher, who was almost in baseline. pic.twitter.com/moXrExuQlU

Turns out Bryce really was paying attention to John Wall last night, because the Washington Wizards star was Harper’s muse for the masterpiece.

Bryce Harper on his walk-off home run: “Just trying to be like John Wall, walk them off a little bit.”

Wall took notice, making him the second JW to offer such affection to Bryce. Pray to every sporps god imaginable that this is the beginning of a new and budding bromance. Harper’s gotta move on from Trea Turner sooner or later since Turner and Anthony Rendon’s relationship is going so well.

My guy lol !! RT @jorgeccastillo: Bryce Harper on his walk-off home run: “Just trying to be like John Wall, walk them off a little bit.”

Dude is so freakin good… #NatsWin