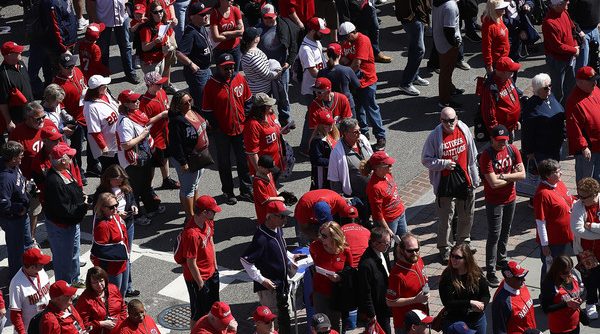 Bryce Harper home runs tend to send shockwaves that could probably be comically illustrated by waking hibernating bears, kickstarting fields of flowers to bloom, and even getting MASN analyst Ray Knight to awaken from his social media slumber.

Everyone’s favorite Uncle Ray is back on twitter dot com and it’s cause to celebrate! Knight went on a Tweet spree that rivaled the Colorado Rockies social media guy’s campaign to defend DJ LeMahieu’s 2016 batting title. His last tweet was in August 2015, urging Lisa (?) to keep the faith. C’mon, Lisa. Get it together.

Lisa..They can get there.. I really believe that they Can!!!!! Team hasn’t been hot all year.. Too much talent not to eventually perform..

Ray, whose bio proclaims himself the number 1 Nats fan, sent and retweeted 30 tweets in four hours. Besides disseminating his hard-hitting analysis to his 1,200 followers, he also compared Harper to a rooster and posted enough Uncle Ray Selfies to last a Gio Gonzalez outing.

… it was to left center.

Trying to throw a fastball by Bryce Harper is like trying to sneak the Sunrise by a Rooster!!

Ray Knight is out here name searching. He kept his haters in line.

@surj03 @RealMattlanta @kingcfb Hopefully one of the more useful ones… hammer?

Not to be overlooked, I give you the Silver Fox’s retweets.

@RayKnight25 thanks for the like, to this day I still say the failure of @Mets not resigning you was a huge reason we didn’t win more ships

After acquiring Adam Eaton for team Twitter as a result of his DL stint, Uncle Ray is a welcome addition. One of us! One of us!