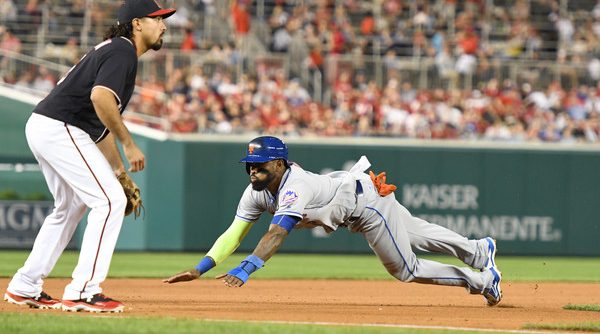 Before we begin, let us pray. Dear baseball gods, please accept this sacrifice of ye fatted calf, to appease thee of any undue hubris. In Scherzer’s name, Kmen.

On July 30th, 2015, the Nationals had a three game lead in the NL East. The new tandem of Drew Storen and Jonathan Papelbon locked down a 1-0 win over the Marlins, while the Mets were in the midst of blowing a 7-1 lead to the lowly Padres. Things were looking good. The next day, the Mets would trade Michael Fulmer to the Tigers for Yoenis Cespedes. That move would ignite a team and a fanbase, who up until this point, were apathetic at best. As of mid-July 2015, the Mets were 17th in overall attendance, despite being in a tight division race, in one of the largest markets in the world. The two rivals would head in opposite directions, the Mets going on a 38-22 tear, including a brutal home-and-home sweep. The Nationals meanwhile, would limp to a 29-33 finish—a culmination of injuries, inconsistency, an awful clubhouse atmosphere, and this guy. If you’re feeling especially masochistic, read Barry Svrluga’s excellent three part post-mortem on that season: Part 1, Part 2, and Part 3. “Where’s my ring?” turned to “WTF just happened?”

These painful memories serve as a reminder. As bad as that second half was, it is the only time in the last six years the Mets got the better of the Nationals. Since 2011, the Nationals have compiled a 75-43 record against their division rival. They have dominated at Citi Field, winning 44 of 61. 2015 was the first time since the 103-loss season of 2009 the Mets won the season series. Not only did it take the Nationals having two games with their full lineup, 341 combined plate appearances from Tyler Moore and Dan Uggla (and a whopping .614 and .598 OPS, respectively), and this guy; the Mets dodged bullet in a failed trade. For all that Yoenis Cespedes did to charge that 2015 run, it almost didn’t happen.

The Mets agreed to — and then backed out of — a deal to bring Carlos Gomez to New York for Wilmer Flores and Zach Wheeler. Not only would they have lost Cespedes’ production, but Flores’, too. He was a major cog in their 20-8 August run, slashing .306/.337/.506. If that trade goes through, there is scant chance they have that run as Gomez would slash .242/.288/.383 after a trade to Houston. Since that six-game sweep, the Nationals have owned the Mets, going 18-10 (.642 winning percentage—a 104-win pace), including Max’s second no-hitter of 2015. In an arbitrary, if-not-for-this-set-of-games analysis: outside of that fatal sweep, the battered and bruised Nationals (led by this guy) won 8 of 12 games.

The Mets are an immensely talented group. Their rotation is the envy of most other teams in baseball (not the Nats, but most teams), and they have a very solid bullpen, anchored by Jeurys Familia. They have a hard-hitting lineup, Cespedes is one of the more-feared hitters in the game, Jay Bruce is crushing the ball, and Michael Conforto is looking like the player he was in 2015. The main issue with the Mets is questionable organizational decision making — both in regards to player acquisition and health.

Harvey is the most famous of these cases. Against doctors’ advice, he pitched through the World Series, despite coming back from Tommy John surgery. 2015 he was an ace. Since then, he has suffered through injuries and poor performance, compiling a 6-12 record and 4.95 ERA, and had surgery for thoracic outlet syndrome — the same injury that doomed Matt Cain. His per-9 rates have cratered: going from 7.4 hits, 0.9 home runs, 1.8 BBs and 8.9 Ks to 10.12 hits, 1.06 HRs, 2.7 BBs and 6.8 Ks (just 5.1 K/9 this year). His line drive rate has risen each of the last two years, his HR/FB% is an unsightly 21.9%. Obtuse jackass John Feinstein loves to troll Nats fans about the Strasburg Shutdown—reminding us that the Nationals had a shot at the World Series, and shelved their best pitcher. Yes, John, the Mets went to the World Series. They also lost and ruined Harvey’s career. But just being nominated is an honor, right, John?

deGrom, Syndergaard, and Steven Matz all struggled with various injuries last year, with deGrom and Matz requiring surgery. This year, the Mets decided to play Cespedes, despite the fact he was unable to stand during batting practice. He subsequently strained his hamstring and is on the DL. Matz seemingly is always on the DL. He’s never thrown more than 148 IP in any season. In fact, none of their vaunted rotation has thrown 200 IP in any season (excluding playoffs). They decided to let Daniel “Hits” Murphy walk in favor of Neil Walker and his balky back. That hasn’t worked out well — Walker played in only 113 games last year and has struggled this year. We all know how Murphy is doing.

The rest of their lineup has been just as afflicted. Lucas Duda hasn’t played a full season in 3 years and is currently on the DL. Travis d’Arnaud has played in more than 67 games just once, in 2014 and is also on the DL. Despite Matz’s lengthy injury history and with deGrom and Syndergaard coming off injuries, the Mets let Colon walk, relying on the unproven Seth Lugo and Robert Gsellman. Lugo has a slight tear in his UCL, and Gsellman has regressed after a promising 2016, with an ominous decline in both spin rate and velocity. The Mets’ answer to these all of these injury trends? Sign no new players this past offseason.

By contrast, the Nationals’ approach to injuries is vastly different. When the Nats suffered all of those injuries two years ago, Mike Rizzo ousted the entire training staff and coaching staff — resulting in a much healthier lineup. The Mets have had the same athletic trainer since 2004. When Trea Turner tweaked his hamstring earlier this year, the Nationals put him on the DL to avoid any further complications — the complete opposite approach to the one the Mets took with Cespedes.

It’s not just the organizational carelessness. The players bear some of the blame. Syndergaard is on the DL after he gained 17 pounds of muscle to throw harder. He refused an MRI this past weekend to pitch against the Nationals. It did not end well for him, or the Mets. Then, there’s Harvey again. Apparently, he was not properly potty-trained.

Their manager, Terry Collins, has made a long list of questionable bullpen decisions (pitching relievers three days in a row, 4 of 5 days, and 5 of 6 in some cases), questionable lineup choices (like benching Conforto and starting Granderson). They also employ two of the more unlikeable players in Familia and Jose Reyes—both have served suspensions for domestic violence, while Reyes has multiple families. Their offense is an all-or-nothing, home-run-hitting club. They rank fifth in home runs, with 43, but are 22nd in OBP at .306 and 27th in batting average at .231. This sort of offense is great when it’s on, but also tends to disappear for long stretches.

Then there are those fans…those classy, classy fans. The only time there is police activity at Nats Park is when the Mets or Phillies are in town. Last year, Mets fans were escorted out last year after throwing garbage at a police dog. What kind of person throws garbage at a dog? And then, there is this fan.

As we head into the second month of the season, the Nationals have a 6 ½ game lead. For all of the Nationals’ good…

…this team does have its warts:

The Nationals currently have the best record in MLB at 20-9. Dusty Baker has been a steadying influence after this guy. As good as we are right now, it is entirely possible the bullpen, mounting injuries, and/or defensive woes, cost the Nationals another division title. We’ve seen it before in 2013 and 2015. Top Mets prospects Amed Rosario and Dom Smith could provide a spark when they arrive later this year—similar to Trea Turner’s ascension last year. Baseball is a fickle creature, and fortunes can change on a whim. However, given recent history, the fearful Mets juggernaut might just be a bogeyman, and nothing more.