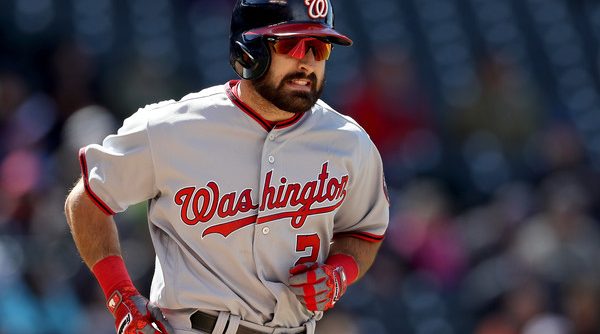 The only thing the Nationals think is more fun than scoring 23 runs in a game, is the friends they made along the way.

1. Anytime Anthony Rendon is required to participate in filling up seven minutes of airtime, it is must-watch TV. But when many of those minutes are comprised of Trea Turner appointing himself and acting as Rendon’s official translator, it’s watch-this-or-I-will-come-force-you-to TV. Turner and Rendon fell further in teammate love in front of MLB Network’s cameras during an interview on Tuesday. They discussed Rendon’s issues with bottling up emotions, the assaulted garbage cans in Rendon’s past, Ryan Zimmerman’s hot start, Dusty Baker, and Rendon’s acting debut(!!!!). It’s Pulitzer caliber.

No left-side of an infield has more palpable chemistry. I just want to know if Rendon is Turner’s ride to and from the ballpark each day, you know, since he likes driving things home so much.

2. A GED recipient at 16, Bryce Harper is devoid of his own prom experiences. He is now on a quest to make up for his deficiency like some bad high school reunion comedy, but with more baseball and less bad. Wednesday, Harper recorded a short video for Sean Garvey, Steve Garvey’s son, to use as a promposal prop.

@shannoncoyne5 I couldn’t find the words to ask you to prom so I had my man @Bharper3407 do it for me @SteveGarvey6 @Nationals pic.twitter.com/G2S0AcpmSl

You might remember that Harper responded to a promposal directed at himself via messenger baseball, just like our ancestors used to. Then again, you might not; few are into teens crying over their crushes. Whatever the case is, hopefully, Harper learned that the real prom was inside him all along.

3. Saturday night, social media exploded with news of and reaction to Adam Eaton’s torn ACL. The injury, which will leave him out of commission until at least October, was sustained in the ninth inning of Friday’s game against the Mets. Eaton lunged for first base during a last-ditch rally and fell in a heap behind first base. As this Instagram video demonstrates, the apple does not fall far from the tree, but it does fall on its way out of the bathroom. Baby Eaton was emphatically safe, not unlike his dad on Friday, according to his mom (probably).

No word yet on if he’ll be kept from taking dry swings (on the swing set) or when he’ll return to block building activities. If it’s serious, you gotta wonder if adorable is a preexisting condition, @GOP.

4. After Dusty Baker’s love for turtles was chronicled during spring training, FP Santangelo rescued what looks like a Red Eared Slider from birds (probably Orioles tbh), officially making 2017 the Year of the Turtle. Santangelo named the tiny reptile after our fallen hero Eaton, calling him Spanky. This Spanky doesn’t even have to worry about ACLs, so I mean, potential center field candidate.

Meet Spanky! Initially called him Adam but went with Spanky. Found him on my morning run in a parking lot with birds circling. Now he has a sick new place in my house. My new bff. #Spanky #RallyTurtle #turtlepower

5. American Hero Tanner Roark brought his daughter to work on Monday’s off-day. (No, not the one who gave us this gem). The result was this Instagram video that Roark’s wife posted to her public Instagram account. It is a moving piece. It is a lesson, not on never giving up, but on giving up half-way through whatever you feel like giving up on and hoping that your (pretty cute) screams distract from it. The tiniest Roark has taken a page from her dad’s book and is a hero to us all.

Hanging with dad at the office . @nationals

The Roarks, you should know, also attended Game 2 of Round 2 in the Caps-Pens series. The Caps lost but we are all winners for having seen this precious family moment.

Some tweets are less bad than others. These are their stories:

Broadcaster says “Zim scores easily.” I wish he would have described how easy.😂😂 https://t.co/eme4btynsl

The Washington Nationals just outscored all but 3 of Alabama Football’s opponents this year with a 23-5 win over the Mets. #WeWantBama pic.twitter.com/T5MMrBMH2d