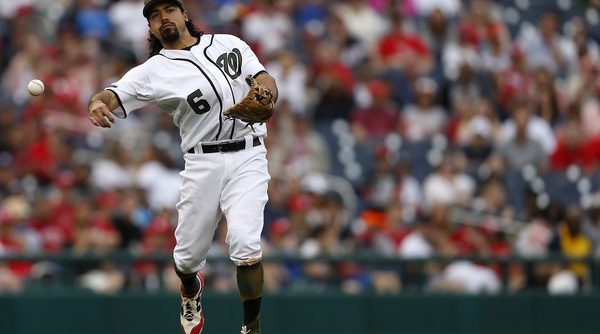 Anthony Rendon hates talking about himself. You don’t have to ask him, or even watch him play: Just watch this interview after his three-homer, 10-RBI afternoon on April 30th. Hear him credit his team’s pitching for the reason why he helped beat the Mets into oblivion, which was, of course, completely unrelated to him getting six hits in six trips. That performance was the talk of the league for, oh, five hours or so. Then the Mets revealed Noah Syndergaard had torn his lat in that game, and Rendon’s name headed to the sidebar. That is exactly how Rendon wants it to be: let him play his game, not talk about how well he’s doing it, and smile the entire time. Unfortunately for Anthony Rendon, it is time to start talking about Anthony Rendon. Many will argue for Bryce Harper, Max Scherzer, Trea Turner, or Joe Blanton (just making sure you’re still reading) as being the Nats’ best player. Here, I’ll make the case for Anthony Rendon in that argument, and, if nothing else, the team’s most complete and underrated player.

The inspiration for this deeper look into Rendon comes from writing the Power Rankings piece earlier in the week where I ranked Rendon seventh and noted how underrated he is. Naturally, I was alerted by one of my regular readers (okay, it was my grandfather) that even I had not done him justice: I had entirely neglected to mention his outstanding defense. It’s true, Rendon should not be mentioned without his defense at the forefront of the conversation. He is not as flashy as Manny Machado or Nolan Arenado, nor does he get on a Top Ten Plays montage at the rate that they do, but if you watch the Nationals on a regular basis you see plays like this seemingly every week:

Rendon makes the hard plays look effortless. Still, while the highlights are nice, the numbers are also important. I looked into what his defensive statistics suggest about Rendon. FanGraphs has Rendon at six Defensive Runs Saved (above the average third baseman). That slots him as fourth in the majors at 3B and the best on the team overall. He is slightly lower in UZR (Ultimate Zone Rating, which combines a few metrics to put a run value on defense), totaling 2.4 runs for 7th in the league at third base. It seems the numbers confirm what the eye is seeing: Anthony Rendon has quietly become an elite defender. It is a wonder that he ever played somewhere besides third, to the point that it is almost a blessing in disguise that Ryan Zimmerman has forgotten how to throw a baseball . . . almost. Rendon is only in his third full season as the starter at the hot corner and is already among the league’s elite. For a team that gets mediocre-at-best defense at catcher, first, second, and left field, Rendon is the anchor of the Nationals defense.

On offense, Rendon has been similarly overlooked. As I stated in the aforementioned Power Rankings, not much was made of Rendon’s early season struggles. He was hitting below .220 as late as April 23rd, yet there was hardly mention of it beyond when he came up to bat. Just about every other starter would have faced immediate pressure from fans and media, yet Rendon and his calm personality coupled with torrid starts from the rest of the lineup allowed him to figure it out slowly. This situation has evidently paid off: Since (and including) that ridiculous 6-6, 3-HR game to end April, Rendon has hit .344 in 25 games with 9 home runs, 23 RBI, and 18 walks to 13 strikeouts. Bryce Harper in that same frame: .255, 7 HR, 15 RBI. For kicks, here’s Zimmerman as well: .347, 3 HR, 14 RBI. (All stats prior to Wednesday’s game.)

Now that he has settled into his groove, Rendon is in the midst of his best year yet. He is slugging .508, above his career high of .473, he is striking out at just over a 15% clip, the best rate since 2014 when he finished fifth in the MVP vote, and he is on pace to drive in well over 90 runs, something that he has never done before. Granted, it is still only a third of the way into the season, so these number could fall. Consider, however, that he spent a full three weeks hitting terribly so he is essentially sitting right in the middle of his extremes. His BABIP of .309 (the consensus average is roughly .300) confirms that he is right on line and not getting abnormally lucky. With health, the most likely scenario seems to be that he will continue this pace.

Not only has Rendon turned his season around, he has been the best hitter in the past month for the Senior Circuit’s best offense. Incredibly, he is hitting sixth in this lineup, which just shows how deep the Nationals currently are. Anthony Rendon will never grab the headlines for more than a few hours at a time, but do not let that mistake the fact that he is likely the most complete player wearing a Curly W.