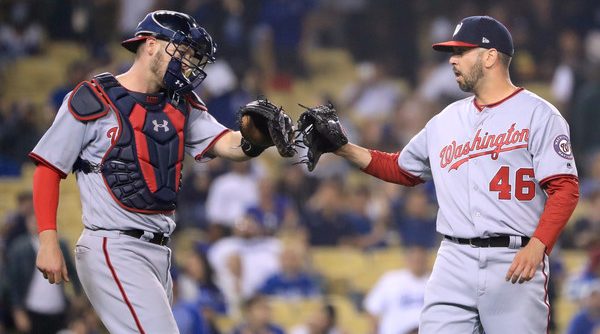 The struggles of the Nationals’ bullpen has understandably garnered most of the negative headlines around DC lately. The bullpen isn’t the only facet of the Nationals performing at near league worst levels, though. The combo of Matt Wieters and Jose Lobaton has quietly been undercutting Nationals’ pitchers this season, one pitch at a time.

No, Wieters isn’t a double agent sent down I-95 by the Orioles to tank a rival’s season. Lobaton isn’t pissed off about a lack of playing time and taking it out on the pitching staff. The two Nationals’ catchers have simply been terrible at framing pitches.

Pitch framing, catcher receiving, whatever term you wish to use, the concept is the same: the manner in which a catcher catches a pitch influences the umpire’s interpretation of that pitch. Too much movement and a catcher can turn what should be a strike into a called ball. With a subtle wrist flick, a catcher can also make a borderline ball into a strike. Pitch framing gets beyond the usual catching defensive metrics like base stealers thrown out or passed balls (though Wieters has had his fair share of those so far this season) and analysts have figured out a way to measure the impact framing can have over the course of a season.

Baseball Prospectus has developed its own pitch framing metric, essentially assigning runs saved or lost to every borderline called ball or a strike a catcher catches. In 2017, Wieters has been the third worst pitch framer in all of baseball, costing the Nationals over 6 runs so far this season. Lobaton has only been the 32nd worst pitch framer on the season in terms of total runs, thanks to his lack of playing time. On a per pitch basis, though, he’s been nearly as bad as Wieters. On the other end of the spectrum, the best pitch framers have the ability to save runs with their framing ability. Braves catcher Tyler Flowers has been the best framer in baseball this year, according to BP, saving Braves pitchers nearly 10 runs on the season thanks to his ability to turn balls into strikes.

Not convinced that the nerds at Baseball Prospectus can actually measure the run value of a called ball? That’s fine, it doesn’t take a mathematics degree to see the real world impact of pitch framing. The Nationals as a team have seen a one percentage point drop in at bats that start with a first pitch strike in 2017. A couple of the starting pitchers have seen a much more dramatic drop off in first pitch strike rate. Max Scherzer’s first pitch strike rate has gone from 65.1% in 2016 to 63.7% in 2017, a drop of 1.4 percentage points. Stephen Strasburg has seen a drop of 5.1 percentage points. Gio Gonzalez has gone all the way from 57.5% in 2016 to 51.3% in 2017, a drop of 6.2 percentage points. Doesn’t seem like much of a change? The wOBA for MLB as a whole in a 0-1 count is only .271. Flip that to a 1-0 count and the league all of a sudden is hitting to the tune of a .363 wOBA. The outcome of that first pitch makes the difference between facing a hitter on the level of slugger Adam Duvall or a light hitting middle infielder like Jose Peraza.

Thinking about it in that light, it’s obvious how big of a difference a single strike or ball call can be in an at bat. Unfortunately for the Nationals, the count of an at bat has swung against Nationals’ pitchers due to the receiving of Wieters and Lobaton far too often this season. Next time pitch track shows a pitch called a ball actually hit the strike zone, hold off on yelling at the home plate umpire. Instead, go back and see how the Nats catcher framed the pitch because there’s a good chance that the catcher caused that strike to be called a ball. That single pitch going against the Nats may not seem like it carries much weight in a 162-game season. But those pitches add up quickly. And let’s be honest: The bullpen needs all the help it can get right now, and Wieters and Lobaton aren’t doing much to help.