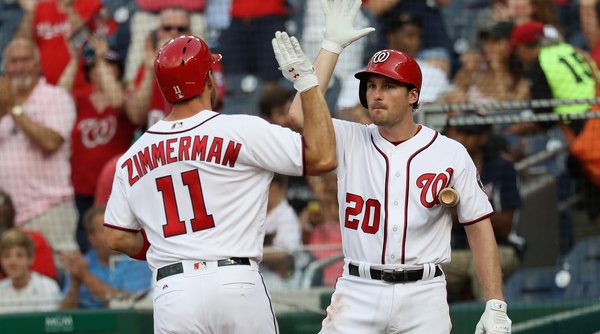 Last year, the biggest stories with the Washington Nationals were the relative disappearance of Bryce Harper and the incredible results from the former Met and present Met killer Daniel Murphy. Today, Murphy and his infectious grin and amusing on-field screams are seemingly forgotten among the many other interesting narratives surrounding the NL East leader. Still, Murphy deserves the proper attention as he continues to showcase that he is one of baseball’s most consistent and effective hitters. In preparation of the impending series with the Mets, allow me to rave about him for a few minutes.

To be fair, I think it is worth noting that a couple parties are consistently recognizing Daniel Murphy’s success. First, the All-Star Game voters, who not only have him leading the NL Second Base vote but also second overall in the NL voting (behind only Harper). The other one who consistently lauds Murph regularly is everyone’s favorite TV star, F.P. Santangelo. Over the past few months, F.P. has consistently compared Murphy to Wade Boggs. Whether you agree with that comparison or it makes you want to take to Twitter to rip into F.P. (find him at @FightinHydrant and don’t tell him I sent you), it is one heck of a compliment. F.P. is not wrong in one regard, at least. Nationals fans should not be taking Murphy for granted: he is a special hitter that is a treat to watch at the plate any given day.

You remember, of course, how great Murph was across the entire season. His numbers in 2017 are almost identical to his from 2016, which is truly incredible for a guy that is on a cheap three-year deal because it seemed no one wanted to sign him. While he hit roughly .300 in his time as a Met, the power was somewhat lacking and his defense was notably atrocious. Since he started wearing a curly W, his power has blossomed into elite status for any middle infielder in the league. Now sustained into year two of his time with the Nats, it is hard to make the argument, as some were, that 2016 was a fluke.

When Murphy is brought up, he and others will consistently rave about launch angle and the benefits he has reaped from improving it. This topic is well analyzed, so I won’t go into that here. What I want to point out is that Nationals fans, and baseball fans in general, are allowing the imploding bullpen and reemergence of Ryan Zimmerman to drop a metaphorical smoke screen in front of the brilliance of number 20. His 2.2 fWAR is on pace to surpass his 2016 total of 5.5, and he is on pace to surpass 100 RBI yet again. His wRC+ is well over the league-average of 100, sitting at 146, good for 11th in the National League. Get the point?

There is plenty to celebrate here, as he is a major part of the reason why Washington has been able to sustain self-inflicted bullpen wounds and build a division lead that has hovered around double digits for a month. With seven games against his former team before the All-Star Break, Murphy has the chance to retake attention in the headlines if he continues his utter dominance of the Mets. If that happens, don’t say I didn’t tell you so. He may not be Wade Boggs reincarnate, but Daniel Murphy being Daniel Murphy has been more than good enough for Washington.