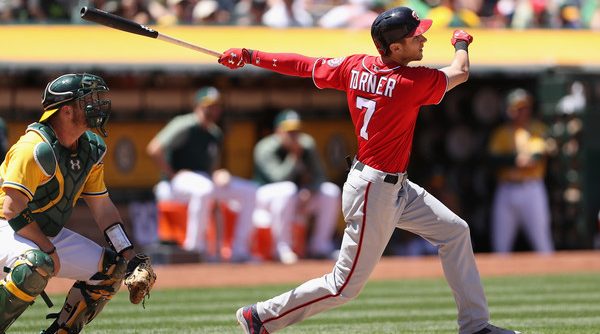 After a slow start to the season that included a brief stint on the disabled list, it seems that Trea Turner may be on the upswing.
In a performance that included three stolen bases, Turner went 3-for-4 in the Nationals’ 6-1 win over the Baltimore Orioles on Thursday. This continued something of a hot streak for Turner, who shined on the Nationals’ recent West Coast swing by going 13-for-42 (.310) over a nine-game stretch. It could even be argued that his recent surge began even earlier, as his production over the road trip was preceded by a 5-for-13 performance over a three-game period during the Nationals’ series against the San Diego Padres by the end of May.
The numbers tell a thorough story of where Turner was before that stretch, and how his production of late has reversed some disturbing early-season trends. Entering the May 26 game against the Padres, Turner was batting .237/.269/.401 over 160 plate appearances. Since that game, his triple-slash line has risen to. 270/.302/.427 over 222 trips to the plate.
There is a lot to be said about his recent stretch, probably starting with the fact that 222 plate appearances are not that large of a sample size. In other words, Turner’s triple-slash line could sharply rise or fall depending upon his performance over the next few games.
With that said, Turner has looked more like the player has always been expected to be in his young career, and it seems that he is shaking off the May slump that caused his numbers dip in the first place.
For the Nationals, having Turner find a more consistent approach at the plate will be a major factor in how their lineup takes shape over the coming months. Turner obviously came into the year with considerable expectations after his excellent rookie season, and the Nationals awarded him with the high profile that comes with being the lead-off hitter and starting shortstop for a contending team. At various points this year, Turner’s production has not exactly matched that profile, so any signs that he is approaching a higher performance level will be encouraging for the Nationals.
The other factor to consider is how the rest of the lineup could take shape. It may have been overly pessimistic to expect Turner’s batting average to lag below .240 all year, but is it reasonable to expect that Ryan Zimmerman — who struggled to stay healthy over the several years coming into 2017 — will maintain his torrid pace throughout the season? And while Bryce Harper’s current production suggests he will make a run at his second MVP in three seasons, can the rest of the outfield contribute its share at the plate?
At some point, the answers to those questions are going become more apparent, but what is clear in the interim is that having too much help in the lineup is never a bad thing. In the case of Turner, having a starting shortstop and lead-off hitter produce at an even competent level is a big boost, and lately Turner is showing that he is more than up to the task of being a catalyst for the Nationals.
Tags: Nationals, Nats, Trea Turner, Washington Nationals