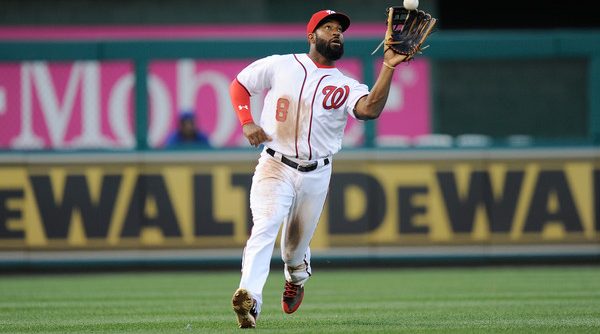 Everyone is hurt, the bullpen sucks, and Gio Gonzalez wasn’t named an All-Star. The Nationals were in a bit of a skid until Max Scherzer hurled a gem on Sunday night, and things weren’t looking so pretty. Trea Turner’s wrist is broken, Jayson Werth is still out, and the bullpen is a revolving door of awfulness. And yet the Nationals have continued to play some consistent baseball. So who’s been the saving grace throughout all these injuries? Not Scherzer or any of the big boppers in the lineup, but Brian Goodwin.

Unless you think about it really hard, Goodwin doesn’t seem like he’s been doing anything amazing. He hasn’t been Bryce Harper-caliber, but he’s been doing just enough to fill up empty lineup spots and make us feel like there’s less of a hole. If a lesser man had stepped in, we’d be noticing Werth’s absence even more and it would start to feel cavernous. Goodwin has been a nice placeholder until Werth is able to recover.

Goodwin hasn’t been making any headlines, but he’s been playing some solid ball. This season, Goodwin has hit .263 with 19 RBI, 17 runs scored, 6 homers, 8 doubles, 14 BB, and an .862 OPS. Not too shabby for a guy who didn’t start the year with the big league club. But his numbers look even better of late. Since Jayson Werth’s injury, Goodwin has hit 5 doubles, 5 home runs, along with 13 BB, 14 RBI, and 14 runs scored. His average isn’t the best (.247), and the Nationals obviously don’t have the best record during that span, but that wasn’t for a lack of trying on Goodwin’s part.

The most impressive part about these stats is that most of his productivity this season has come in this portion of time since Werth’s injury. Goodwin has saved some of his best ball for when the club needed it most. He’s partaken in some timely hitting, swatted some homers in key moments (namely his two-homer game which helped lead to a walk-off win against Cincinnati), and helped shore up a lineup that desperately needed help.

Can Brian Goodwin truly replace Jayson Werth in the long run? No, absolutely not. Werth has been pivotal to the Nats’ success and it would be best for him to be back as soon as possible. But Goodwin has done an excellent job filling in. Goodwin’s success has helped prevent utter disaster for the Nats offensively, and they’ll need even more from him while Turner and Werth are on the shelf. But if these trends continue for Goodwin, he’ll have a successful rest of the year, and possibly be a suitable successor to Werth some day soon.