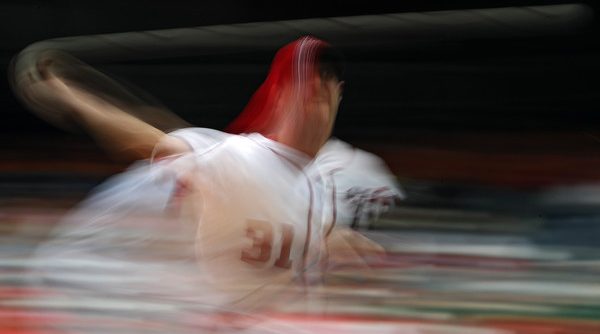 The Washington Nationals gave Max Scherzer a whole lot of offense for his birthday on Thursday, outdoing any birthday present you’ve ever given or gotten. There might even have to be a rewrite on the Twelve Days of Christmas to change the lyrics to “eight home runs… and a pigeon with a great seat.” Knowing that this is the off-field content we live for, the Nationals didn’t stop there.

2018 All-Star Game logo about to be unveiled pic.twitter.com/cevS3COpAx

Harper says he will definitely participate in the Home Run Derby in D.C. if given the opportunity next season! #IBackTheNats pic.twitter.com/FyTWU0tWTq

The official logo of the 2018 #MLB @AllStarGame presented by Mastercard and hosted by the @Nationals in Washington, DC. pic.twitter.com/JMuNVcy2fi

The Nationals have yet to extend Baker’s contract past 2017, so who can really blame  any malcontent he may or may not be feeling. Who would enjoy talking about an exciting vacation they might not be invited to?

2. During a week in which Fangraphs and The Ringer decried MLB for ignoring Anthony Rendon’s stardom, Rendon made sure that he reiterated some other traits that he is totally underrated for. He helped kids pick sunglasses at the second annual free eye care clinic for the Nats Youth Baseball Acadamy, which he also helped organize. The event is sponsored by the Nationals director of visual performance Keith Smithson and provides free eye exams and perscription glasses to scholar-athletes. Come on, look at that picture and tell me it doesn’t ooze star power.

3. Imitation is the sincerest form of flattery. If Jude Oz, Jayson Werth’s One True Protector, had tried to imitate anyone in the bullpen before Mike Rizzo acquired Ryan Madson and Sean Doolittle, her stance might have looked a little more akin to flailing or combusting. So, thank the baseball gods for that trade because here she is doing her best impression of Doolittle’s glove chin-table.

Out in the back yard early today practicing. I guess someone approves of the new bullpen. @Nationals @CelebBaseball @JWerthsBeard  #closer pic.twitter.com/XDB77JVyAh

4. Bryce Harper loves chance the rapper. We know because he often wears the signiture Chance “3” hat, both in postgame interviews and in the background of his wife Kayla’s Instagram story. Love makes a person do crazy things. Sometimes those crazy things are screaming at an umpire. Right, Bryce?

Bryce Harper said he got too fired up before the game from listening to Chance the Rapper and Logic. “I think I need to change my playlist.”

Check out our interview with the Scherzers! They love their #rescuedogs and being a part of the @Nationals family. https://t.co/AvHoZ44wPg pic.twitter.com/4pdof8Xjnk

6. You know him. You love him. He’s the pigeon we all love to adore. It’s Rufus, the friendly neighborhood pigeon. Rufus, named by the Washington Post’s Clinton Yates, earned himself a spot in the Nationals Twitter header after occupying a spot behind home plate during all eight homers hit by the Nationals on Thursday and the seven other runs scored, plus even a little time while the Nationals were on something called “defense.” DC has a high pigeon population, maybe Rufus should be on the All-Star logo instead.