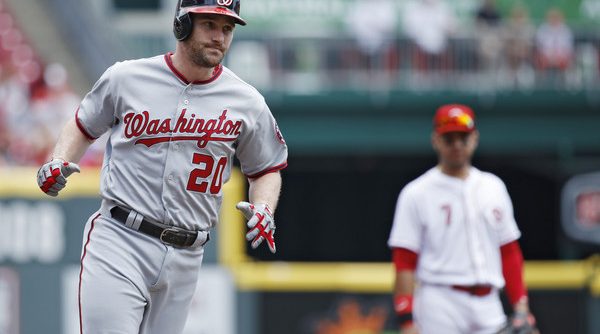 Like myself, the average Washington fan likely watches 98% of Nationals games either on MASN with the beautiful and eloquent F.P. Santangelo and Bob Carpenter calling the game or at Nationals Park itself (that two percent discrepancy being those cursed Sunday nights on ESPN during which Aaron Boone and company talk about is the Strasburg Shutdown for three hours). While that is normal for any particular fan base, you can often end up somewhat stuck on certain narratives and ideas about your team. I had to opportunity to become quite attuned to this when I was able to go to Cincinnati to watch the first three games of the recent Nats-Reds series.

Here’s a quote from a really nice gentleman sitting next to me talking to his wife in the third inning of Game 2 of that series:

“All I can say, honey, is at least we aren’t facing that guy from last night. We’d have no chance.”

“That guy” he was referring to is Gio Gonzalez. He said this in the midst of a game started by Max Scherzer. I turned to my dad and shared a laugh about it, but when you think about it, it really was not a ridiculous thing for a very casual observer to say. After all, this man had just seen that tough lefty tear through the Reds lineup, including absolutely locking down Joey Votto, and had seen Scherzer weasel his way out of two jams in three innings. Baseball is amazing like that because for someone who does not follow the game nationally and only somewhat follows their team, they have no way of knowing what they said is incredibly memorable. If you had only watched the Nationals play 12 innings of baseball by that point, was there any doubt that the ace of the team was Gio Gonzalez?

When you watch the same team every night for years, you start to look for certain things. Gio gets 25 outs and Nats fans are still tempted to worry about when he is going to fall off a cliff. Max Scherzer puts two men on with no outs twice in the first three frames and escapes with no runs, which Nats fans likely view as a testament to his greatness. The guy in a Reds hat behind me? He saw it as yet another example of “the Reds offense not doing a damn thing as usual, it’s like they are trying not to score.” I love that two people see the same game and can have entirely different takes on what just occurred.

While you find these really interesting differences in perspective when fans of opposing teams are seeing your team for the first time, sometimes you end up getting some painfully funny similarities. I heard numerous people wonder why Anthony Rendon was hitting sixth, including one guy on either Saturday or Sunday who actually asked me that question (I had no good answer, considering I ask myself that daily). During Saturday’s ninth inning bullpen debacle, a couple fans around me asked how a team this good has such a bad bullpen. What do you say to that besides shake your head?

One thing that was striking about Great American Ballpark was how small it felt. While you probably know that it has a reputation for being an extremely hitter-friendly park, the way the seating is set up makes it feel tiny. The lower bowl is short, meaning there are relatively few rows. This puts the upper levels far closer to the field, making for an intimate setting. I am convinced that the small feel of the park is what gives GAB what I felt to be its most important feature: the people. Each game the Reds fans surrounding me wanted to talk about how I ended up there, what they should know about the Nats, and baseball in general. There was no animosity at any level, and I never once got chided for standing and applauding the many, many home runs Washington kept pounding.

While I have seen the Nationals on the road a few times before, I have never watched them across an entire series on the road. By the end of the third game you really get a feel for the park, the city, and the fans. That is an extremely loyal fan base in southwestern Ohio, nearly filling the place on Friday and Saturday night to watch a really bad home team (that loyalty also shines through at the Reds Hall of Fame just outside the park, which is essentially a three-story shrine to Pete Rose with some other guys thrown in). In all seriousness though, the people of Cincinnati embody the spirit of baseball. Whether the fans were highly knowledgeable or the most casual of fans, their devotion to their team and respect to visitors like myself left an impression. Seeing the Nats in an unknown city across an entire weekend was one of the most interesting baseball experiences I have ever had. If you can, give it a shot.