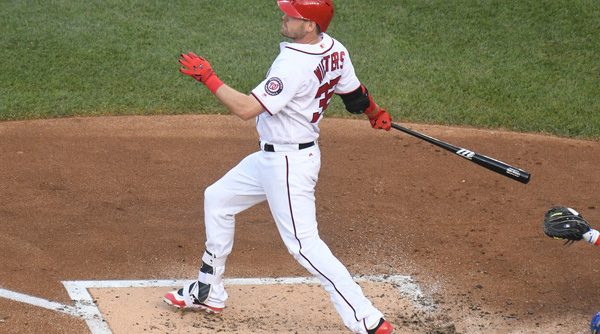 I have very distressing news: Matt Wieters has gone missing. I know his name has been in the lineup; I know it looks like he has been crouching behind the plate. But can you really be sure behind all that catcher’s gear it’s actually him? Because, for the last two months, there has been very little evidence in the box score to prove the presence of Wieters.

The Nationals were very pleased with the addition of Matt Wieters following his April performance. A .301 batting average, a .400 on base percentage and four home runs were good enough to make Wieters 40% better than league average with the bat (according to weighted-runs created plus) and look like the free agent steal of the offseason.

Since that time period, though, Wieters’ spot in the lineup has turned into a black hole. From May 1 to the conclusion of Thursday’s game, Wieters has hit a mere .224 with a .247 OBP, a line 56% below league average. It’s such a stark difference that it’s hard to believe it’s the same player.

Wieters’ struggles are focused in two areas: left-handed pitching and fastballs. In April, Wieters hit .435 against four seam fastballs with a .348 ISO. In May and June, he’s hit a paltry .190 against the pitch with an ISO of only .068. Wieters has been a better hitter from the right side over his career, and that played out in the smallest of sample sizes in April. In only nine plate appearances, Wieters logged five hits, including two home runs, when facing left handed pitching in April. He’s had only five hits from the right side of the plate in the two months since.

It’s pretty obvious that Wieters’ hot April was mostly a flash in the pan. As the definition of a plodding catcher, Wieters has a career batting average on balls in play (BABIP) of .285. In April, his BABIP was up to .321, meaning his .301 batting average was propped up by batted balls that normally wouldn’t fall in for hits. On top of that, Wieters cut his strikeout rate down below his career level and was taking walks at a rate over 60% higher than his career walk rate. Regression was imminent.

And, of course, regression hit and it hit hard. That BABIP dropped all the way down to .266. Wieters’ walk rate plummeted to a measly 3% and his strike out rate jumped to 21%, two percentage points higher than his career mark. It wasn’t just regression taking hold, it was a massive overcorrection.

It’s been such a bad two months that it almost makes the Nationals’ decision to sign Wieters look like a mistake. The Nationals, of course, traded away Derek Norris to the Rays to make room for Wieters. Norris has struggled in 2016, so much so that he was actually released by the Rays this week. Norris, though, was hitting at a rate only 32% worse than league average this season, 24 percentage points better than Wieters’ terrible two months.

The good news for Nationals fans is that it seems unlikely Wieters will be this bad for the rest of the season. The usual signs that would accompany an erosion in talent just don’t show up for Wieters, even in his terrible May and June months. He’s not chasing pitches out of the strike zone more often. He’s not swinging and missing significantly more than used to. He’s not hitting a ton of ground balls, a la Ryan Zimmerman. His hard-hit and medium-hit rates are nearly identical to his career levels. Wieters won’t get back to his April numbers, but it’s reasonable to expect Wieters to bounce back to the league-average hitter he has been for the last several years of his career. It’s not the type of offensive performance that will blow anyone away, but he also won’t be a black hole in bottom half of the lineup like he has been for the last two months.