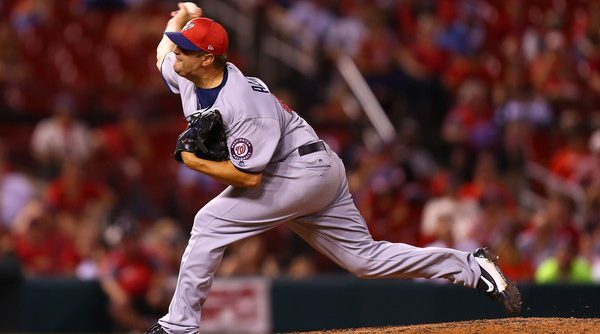 Look: I’m sick of talking about the bullpen, you are sick of reading about the bullpen, but we really don’t have a choice. The Nationals have an elite offense (even more so if they get healthy) and an elite rotation, but have been treading water for the last couple months because of a ‘pen that cannot keep runs off the board. Fortunately, the stiffest competition has a bullpen that is nearly as useless, leading to a massive lead in the division all the same. The resulting popular rhetoric has been “the Nats have time” and “why rush into a move, maybe they can figure things out before the last week of July.” I am here to challenge that notion with some thoughts on the hidden costs of the 2017 Nationals bullpen.

Like many Nats fans, General Manager Mike Rizzo has publicly acknowledged the bullpen issue, but has made it clear that he thinks there is plenty of time to figure things out. In a recent Washington Post article, Rizzo expressed anger about a Nats player anonymously stating to Thomas Boswell that he was tired of them waiting to make a move. Whoever it was said, among other things, “Waiting is just doing more damage.” I tend to agree with Mr. Anon.

There are two issues I want to focus on that are somewhat hidden at first glance. First, there is more to the current bullpen problem than just ineffectiveness and lack of results. There is a mental game at play here as well. You can tell that the team is frustrated by constantly giving up ninth inning leads and the relievers seem almost exasperated.

When Curtis Granderson tied up Monday’s game down two runs with two outs and an 0-2 count, the face of Matt Albers said it all. He cringed, shocked that the ball cleared the fence, then made a face that is best described as “nine-year old who just got told no by his mother for the tenth time that day.” He made a bad pitch and he paid for it, but the reaction spoke loudly about how often things have gone bad in this situation. This was a “no, please, not again” face. The lack of confidence is obvious, and it is not just media and fans who see it.

Here’s a glimpse of how clearly Washington’s opponents see it as well: in the last four games, the inning following the removal of the Nationals’ starter, their opponent had at least one hit – three of those times they had two or more. Sure, part of that is because the relievers struggle getting guys out in general, but there is little doubt that opposing teams know that as soon as you get into the bullpen, their odds of getting on base skyrocket. Baseball is so mental that this is a huge edge for opponents. I am a firm believer that part of how effective and consistent guys like Mariano Rivera and Aroldis Chapman is the fear factor that accompanies them. Nats relievers bring along the exact opposite effect. Opponents are like hungry lions and the ‘pen is a fat steak to be gobbled up.

While trading for a number of ‘pen arms will help the actual talent level to some extent, the bigger factor is how it will change the attitude and perception in the clubhouses on both sides. Imagine the combination of David Robertson and Tommy Kahnle (I will be your driver of the Kahnle bandwagon for the next month, hop on board please) stepping in with the last of holding a 2-0 lead after seven. Everyone in the ballpark will have a different feeling on how the game will end. This is the what the Nats are trading for, a change in mindset.

My other fear is far more abstract and definitely more controversial. That Albers face from earlier? Right before it, the cameras showed Bryce Harper after Granderson’s homer cleared the fence directly over his head.

This reaction scared me as it happened, and I have not been able to put it out of mind. This is not frustration, or anger (as he showed later in the dugout as he sat alone brooding before Ryan Rayburn waked the Mets off), this is resignation. This is a man who has seen this story all too many times. As fans booed and Dusty Baker lost another month of his lifespan, Harper leaned up against the outfield wall thinking about something we will never know. Remember Mr. Anonymous in the clubhouse? What if it was Bryce Harper, as quite a few have conjectured? Your franchise player is doubting the leadership and their willingness to make a move necessary to win. If you watch and listen to Harper at all, you know how winning is the most important thing. This is not what the leadership should want in the back of his mind during contract negotiations in 2018.

Don’t get me wrong, I am in no way saying that Bryce Harper will not re-sign in Washington because of an early July blown save that still ended up as a win. What I am saying is that when it comes down to trying to lock up the likes of Harper, Anthony Rendon, and even Trea Turner eventually, will they have doubts about the team’s willingness to do whatever it takes to win, especially when a problem is this obvious? That is not a risk I want to take to any extent. Leaving the bullpen as is only exasperates those in the clubhouse who are leaders and have performed to all-star levels this season. We can’t know what any of them are thinking, but the next year and a half will be a defining period for the franchise. The risks, whether real or simply imagined here, are too great to allow this festering bullpen to stand any longer.