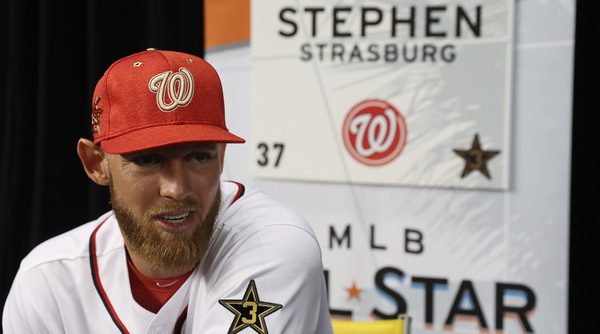 With Sean Doolittle and Ryan Madson holding down the 8th and 9th innings, the rotation is now the Nationals biggest question mark. Maybe Stephen Strasburg isn’t really injured. I’m not a doctor, and I didn’t stay in a Holiday Inn Express last night. But I know enough to know that when pitchers leave games with “forearm tightness,” it ain’t good.

Strasburg hasn’t made more than 24 starts or pitched more than 148 innings since 2014. He wasn’t around for the 2016 playoffs. Even if being pulled for precautionary reasons after the second inning Sunday isn’t a big deal, it shows that standing pat with the current rotation at the trading deadline is a bad idea for the Nats.

The Nats are lucky to have three starters with healthy track records. Max Scherzer has made 30+ starts for the last eight seasons. Gio Gonzalez has done it six of the last seven years. Tanner Roark has made 31 and 33 starts in the two seasons the team has let him start. But those three pitchers weren’t enough to beat the Dodgers last year, and they won’t be enough this year either.

Even if Strasburg makes his next scheduled start this Saturday, it’s no guarantee that he’ll be available for October. There’s no guarantee the other three guys will be healthy then either. Edwin Jackson is back on the team because the organization had nobody in the system to replace Joe Ross when he went down. The team’s top pitching prospect, Eric Fedde, has a AAA ERA north of 5.00 and hasn’t pitched more than 5 innings in months. The cupboard is bare my friends.

Cliches are boring, lazy, and rarely add anything to a discussion. But sayings become cliches because they’re usually true. And so it is with the cliche, “You can never have too much pitching.” Pitchers get hurt, even the healthy ones and especially the less-than-healthy ones. Teams are falling out of the playoff picture, so more and more starters are becoming available with one week left before the trading deadline. The Nats can win the division as is. But this team is too good to just make the playoffs.

Hopefully Strasburg’s forearm is just a little stiff, like he and Dusty Baker say. Hopefully he’ll be around for the postseason. But getting a pitcher better than Gio would be a great insurance policy, and if everyone stays healthy, then Roark can move to the bullpen for the playoffs and be ready to step in if anybody *cough* Gio *cough* lays an egg with the season on the line.

I believed the team should be in the market for more starting pitching before yesterday, and even before Ross’s injury because pitchers get hurt. They lose effectiveness. I believed this because you can never have too much pitching.

Good thing Mike Rizzo still has a week to get more. Let’s hope he does. Break a leg Mike. Be not afraid of greatness.