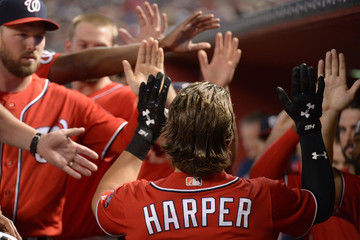 On Saturday in Arizona, Bryce Harper hit a home run that broke Statcast. A day after Aaron Judge almost hit a ball out of Safeco Field and was unable to get a Statcast read, Harper countered with his own immeasurable shot. Harper clobbered a solo shot off Anthony Banda in the first inning of his Major League debut that landed over the pool in right center. My, oh my.

While there is still no official measurement on Harper’s moonshot, I think it’s safe to say, just on sight, that it will stand as the Nationals’ longest home run of 2017. But he hasn’t been the only Nat punishing baseballs this season. If we take a look at the longest Nats homers of 2017, Bryce didn’t even hold the crown.

Yes, Ryan Zimmerman had the longest Nationals home run at least until this point. He actually had the longest home run in the majors for a few hours until Jake Lamb crushed a 481-foot bomb later that day.

During his torrid April, Zimmerman saw a pitch from Addison Reed and had eyes on sending it to the concourse in left field. He came just short of that, instead depositing it into a section of dismayed Mets fans 470 feet away from the plate. Zimmerman, the king of exit velocity, sent it out at 110.5 miles per hour. The solo homer would come in an eventual loss, but on the bright side, no matter how long Bryce’s homer is calculated to be, Zim’s home run will stand as the longest at Nationals Park in the Statcast era.

The most iconic part of Nationals Park? Nothing stands out more than the red seats. But to catch Anthony Rendon’s 454-foot blast, you would’ve had to be sitting above the red seats. Not many balls find their way that far up the section. I’m still waiting for the day someone actually gets one into the brewhouse.

The center field batter’s eye is “where the big boys hit ‘em” at Nationals Park. Bryce Harper almost went completely over the batter’s eye. Harper scraped the very back wall by the garage in the batter’s eye 450 feet away. Maybe with a little more juice it could have cleared that wall. Regardless, Harper sent that out at 109.9 miles an hour.

Remember when Michael Taylor crushed a 492.8-foot homer at Coors Field in 2015 that was the longest homer in the Majors for a while? Taylor seemed to have recaptured some of that form for this home run, before landing on the DL a few weeks back. During a game in which the Nationals scored 18 runs, Taylor hit one off the batter’s eye grass in center for his second of the game. It may not look like much to the naked eye, but the numbers do not lie.