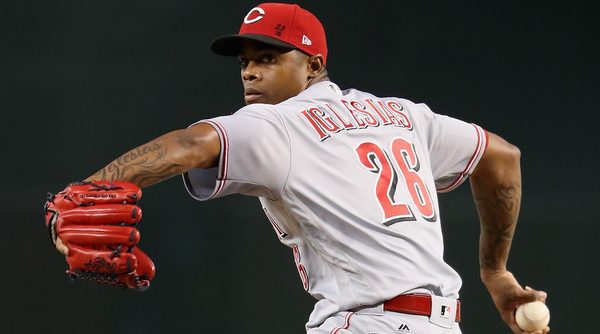 A few months ago, I wrote about some relievers the Nationals could pursue in a trade. In the intervening months, during which the Nats’ bullpen has only festered further, more rumors have sprung up about who the Nats may be interested in. As such, I’ll break down a few of those names using the same system I used last time — rating each player’s ability and acquisition price.

In the middle of June, FOX Sports’ Ken Rosenthal reported that the Nationals had identified Madson as one of their top targets for relief help. His career has been somewhat of a rollercoaster: He was a dominant reliever for the Phillies a decade ago but suffered a torn ulnar collateral ligament in the spring of 2012, undergoing Tommy John surgery. His recovery was much more fraught than usual, and he was nearly off the major league radar when he signed a minor-league deal with the Royals in 2015. That ended up being the best year of his career, as he posted a 2.13 ERA over 63 1/3 innings.

After an off 2016, Madson has returned to his peak form this year, striking out nearly a batter per inning and walking just 1.5 per nine en route to a 2.27 ERA and 2.65 FIP. His contract calls for him to be paid $7.7M this year and next, so the Nationals will be on the hook for roughly $12M for the rest of this season and 2018.

As the above stats established, Madson is still a pretty effective setup guy. But the picture isn’t quite as rosy as it seems. He’s 36, and paying a 37-year-old Tommy John survivor almost $8 million next year is a little scary. Additionally, a lot of Madson’s success this year has come on suppressing home runs, as he has allowed just two in 35 2/3 innings. Despite the league-wide homer bonanza, that may be sustainable. Madson is getting a lot of ground balls — so many that his home run/fly ball ratio (a reasonable 11.8%) is almost the exact same as it was last season, when his HR/9 was almost double what it is now. He will also benefit from moving to the NL, though he will be leaving the cavernous Oakland Coliseum for a more homer-neutral park in DC.

Madson is a good bet to be a strong setup man, at least for the rest of this season, and his hefty contract means the price in prospects will be limited. But will the Lerners be willing to pay up for his salary? They’ve historically been very resistant to add salary mid-season, but has this season shamed them into investing in relievers? If they insist on having the other team pay the full salary, it will be a challenge to add the multiple relievers this bullpen needs without decimating the farm system — an unlikely path given the Lerners’ proclivity for prospects.

Rosenthal identified the Tigers’ Wilson as another top Nats target. The former Pirate and Yankee has always been a strikeout artist, but he’s jumped to an eye-popping 13.2 K/9 this season, with reasonable walk and homer rates leading to a 2.41 ERA and 2.91 FIP. Wilson is a lefty, but has always been better against righties.

Like Madson, Wilson is under control for 2018. But he’s only making $2.7 million this year and under arbitration for next year, so he will be much cheaper in terms of dollars. On the other hand, he’s 29 and has a relatively clean medical history, so he’ll cost much more in terms of prospects.

FOX Sports’ Jon Morosi reported a few days ago that the Nationals had shown interest in Iglesias, the newly minted Reds closer. A 27-year-old former starter who made his MLB debut in 2015, Iglesias is a fireballer whose fastball averages 97 MPH and touches 100.

In a season and a half of relief work, Iglesias has posted a 2.09 ERA after running up a 3.88 ERA in the rotation. But his underlying numbers have not changed too much: He is striking out batters slightly more while walking them more. The main differences are in numbers commonly attributed to luck, as his relief BABIP has sunk to .239 from .296 and his HR/FB rate has fallen by two thirds to 5.9%.

Iglesias seemingly has dynamite stuff, but his low relief ERA (1.73 this season) looks like a mirage. He signed a 7-year, $27 million deal with the Reds out of Cuba, so he is making $4.2M this year, $5.2M each of the next three years, and will be under arbitration for 2021 before hitting free agency in four years. His youth and good surface stats will make him extremely expensive, which could make a deal challenging for the Nationals.

Doolittle has never been formally connected to the Nationals, but as a great reliever on a bad team, he’s as sensible a candidate as anyone. The career Oakland A was an All-Star in 2014 but has dealt with serious injuries since then, never reaching 40 innings pitched in a season.

While he suffered another injury this season, his numbers demonstrate his value when healthy. In 19 1/3 innings, he has 28 strikeouts to just two walks. But he is an extreme fly ball pitcher, with a rather elevated homer rate the last two years with the (allegedy) juiced ball. It’s very possible that problem could worsen for him if he leaves Oakland. Additionally, he’s on a very team-friendly contract that pays him $2.6M this year and $4.4M next before $6M and $6.5M team options in 2019 and 2020. His gaudy strikeout totals and long-term contract will make him expensive in trade, and his injury volatility makes him a less than logical fit for the Nats.

Swarzak has been a vaguely above-replacement reliever for his career, but the righty has really taken off with the White Sox this year. His 9.4 K/9 is far above his career level of 6, and his 2.4 BB/9 is below his career rate. Behind those, he’s earned a 2.41 ERA and 2.18 FIP.

But there’s reason to believe that’s not sustainable. He’s allowed just one home run in his 41 innings pitched this season, which is totally unreasonable for a pitcher who induces about 40% fly balls and has a career 9.2% HR/FB rate (it’s 2.4% this year). But even if his homer rate rises, Swarzak could still be a useful reliever with his strikeout and walk rates. He should also be cheap to acquire: He makes just $900k this year and is a free agent this offseason. He shouldn’t be relied upon as a closer or setup man, but Swarzak could be a nice third addition to a team that needs all the competent relievers it can get.