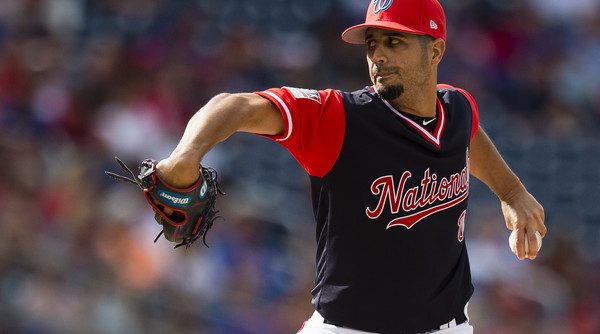 When talking about the National League Cy Young award, the talking heads only seem to talk about two names: Max Scherzer and Clayton Kershaw. And while those are good names to discuss, that’s not the name they should be talking about. Right in the middle of the talks should be Gio Gonzalez.

The general baseball world hasn’t paid him much attention, but Gio has been having the best year of his career. He’s among the best in baseball in many of the most important stats this season, and he was absolutely robbed of an All-Star nod. When you’re on a starting staff with Scherzer and Stephen Strasburg, it’s easy to get overlooked, but someone needs to start tooting Gio’s horn for him, because people need to start paying attention.

All of Gio’s numbers this season are dazzling. His ERA is 2.40, which ranks 3rd in the MLB behind only Kershaw and Scherzer. His WHIP is 1.11 (5th in NL), and his BAA is .206 (3rd in NL). His OBP/SLG/OPS is currently listed at .286/.325/.610, and he has a BABIP of .246. He’s been good all year, but his work of late has been stellar. His second-half ERA is currently listed at 1.29, and his ERA in August is below 0.50. Opponents are hitting .121 against him with RISP, and his 1.79 ERA at home is the best in the MLB. Gio has also shown great consistency and has been able to take on a great workload: he’s gone 6 or more innings in 22 out of his 26 starts, throwing a decent number of pitches in all of his starts. Gio’s had many fabulous starts this season, but none of them top his start on July 31 in Miami against the Marlins, going eight no-hit innings before giving up a leadoff single in the ninth. Not to mention all of this happened on Jose Fernandez’s birthday, on the first day Fernandez’s family had been back to Marlins Park, and Gio did it in front of his hometown while a few days away from becoming a two-time dad. It’s been a ride of a season for Gio.

But what is it that’s so different about this season? How is it that this season he’s been able to push it to the next gear? I believe that there’s one huge factor contributing to this: Matt Wieters.

Wieters was signed by the Nationals late into Spring Training, and he’s been incredibly valuable to the pitching staff — especially Gio. Wieters is a four-time All-Star and a two-time Gold Glove winner, and he’s a trusted nine-year veteran. Gio has pitched to three other catchers for 100 or more innings in his career (Kurt Suzuki, Wilson Ramos, Jose Lobaton), and the three of them combined cannot claim that many accolades. Wieters is trusted and knows what he’s doing. He’s calm and collected behind the plate, and he’s had an invaluable impact on Gio’s game. Whatever it is, it’s an intangible factor that can’t be measured, but Gio and Wieters have clicked perfectly and have raised Gio’s game to a whole new level. Gio trusts Wieters completely, and Wieters knows exactly what to do to get Gio to pitch to his full potential.

But more importantly, Wieters’s presence has changed Gio’s demeanor on the mound for the better. He’s a lot more relaxed and doesn’t let his emotions get to him, and as a result he’s pitching a lot better, as seen by his stellar numbers. For whatever reason, it just works.

In short: Gio Gonzalez is pitching his butt off this season. Whether or not that can all be attributed to a new catcher can be debated, but it’s certainly a big factor. And he shouldn’t be ignored in the Cy Young talks. He’s been putting up Cy Young-caliber numbers, and even if he doesn’t end up going home with the award, there is no question in my mind that he should at least be a finalist.