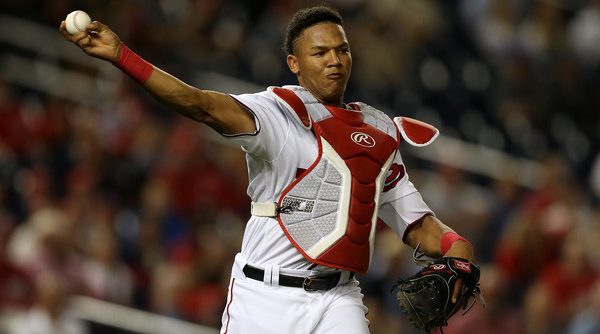 By the time you read this article, it’ll be September. As we all know, that means rosters expand and anyone on the 40-man roster is eligible to be called up. Chief among the certain recalls will be Pedro Severino, the catching prospect who the Nationals are fond of, at least to the extent that they wouldn’t trade him straight-up for White Sox closer David Robertson. The next few minutes of your life will not be spent reading about why Severino is the next Buster Posey, or even why he should be starting games: neither is really true. Pedro has found some success at the Major League level which I will discuss in a minute, but his inability to get on base consistently or hit for much power at any level is why he has not been banging down Matt Wieter’s door this season. Instead, this is a condemnation of one of baseball’s worst hitters in 2017: Jose Lobaton.

Disclaimer: I love Lobaton from what we see of him in the dugout. Goofball, lighthearted, helmet-puller, all things you want from someone without a major role in games. I would love for him to continue all of these antics, just without the in-game appearances. But here is the reality: Jose is having the worst season of his career, one that has never been marked with high-quality offense to begin with. He’s hitting .160 (!!) in 131 plate appearances with only seven extra base hits and three times as many strikeouts as walks – 29 K’s, 10 BB’s. The advanced stats confirm these painful numbers as well. Of hitters with at least 130 plate appearances, Lobaton has the second worst weighted runs created (wRC+) in the league with 30, behind only fellow catcher Chris Stewart (17). Reminder –  league average is 100. Notable players with a better wRC+ than Lobaton include old friend Danny Espinosa, cut by two teams already this year, and Max Scherzer, who is far from a Silver Slugger pitcher.

Severino is interesting numbers-wise because he has been consistently mediocre in the minors but has always hit well in limited action when called up to the Nationals. In AAA this year, he has hit .239 while slugging a slim .333. In the majors, however, he is a career .302 hitter, albeit in just 49 plate appearances. Though there has been effectively no power in the majors either, he has never been projected for power, so we know that comes with the territory. This year he saw action in nine MLB games, getting three hits in eleven trips to the plate. He also strikes out less than Lobaton (22% K rate), with a 19.5% rate this year in the minors and a 16% rate in his career in the majors. My biggest issue with Severino is that he doesn’t walk at all. For a guy who would only hit 8th when in the lineup this is an area that must improve for him to get regular time in the majors.

While it would be entirely unfair to compare these sets of numbers considering the difference in sample sizes, they tell me two things. First, Pedro Severino has at least shown that he isn’t fazed by the moment. He’s had a cup of coffee each of the last three seasons and has yet to be a let-down even when being used so sparingly. Maybe it’s just chance or dumb luck, but maybe he thrives under the big lights. Why not spend the month giving that a little more of a look?That leads to point number two: Severino cannot possibly be worse than Lobaton. Lobaton has historically given his teams relatively little offensively, but never to the extent that he has in 2017. That lack of contribution has always been offset by

That leads to point number two: Severino cannot possibly be worse than Lobaton. Lobaton has historically given his teams relatively little offensively, but never to the extent that he has in 2017. That lack of contribution has always been offset by elite defense: between 2012 and 2016, he never produced less than 2.0 WAR in a year. Now in 2017, with more innings than he had in 2016 and nearly as many as 2015, he has a 0.6 defensive WAR. Since WAR is a counting stat, he clearly isn’t even giving the Nationals the one thing he is supposed to excel in. Severino’s scouting report suggests defense is his strength as well, meaning he would be expected to be a somewhat similar player to Lobaton in previous years.

Given all of this, what could the Nationals possibly have to lose by giving all of Lobaton’s reps to Severino? If Matt Wieters gets hurt like Wilson Ramos did last year, there is no doubt that Jose Lobaton would be a painfully insufficient replacement, 2016 NLDS homer notwithstanding. I cannot say the same about Severino. If nothing else, he has never shown that he CAN’T play at this level. Consider that last year he and Lobaton split the regular season and playoff reps after the Buffalo’s injury, and that was when Jose was a somewhat competent hitter.

Yes, the Nationals should have looked into trading for a backup catcher option, and maybe they did, but it is too late for outside help now. With more rest for starters like Wieters pretty much guaranteed, using Lobaton instead of Severino does the team a disservice. Jose is a wonderful presence on the bench and the clubhouse, seemingly both a player and fan favorite, so let’s let him thrive in that role and look to improve the talent on the field any given day. September (and the playoff roster) will be easier to stomach with Jose Lobaton in a sweatshirt and Gatorade glasses every night.