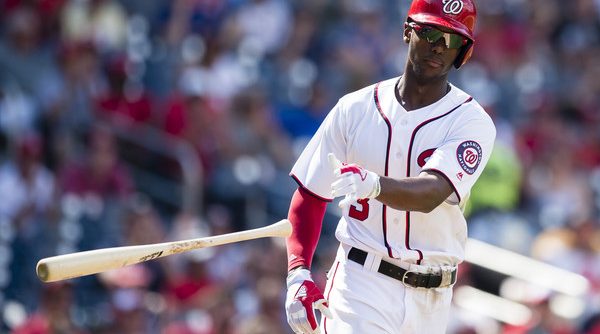 With all the injuries decimating the Nationals this season, Nats outfielders have been dropping like flies. And with Bryce Harper and Brian Goodwin going down quickly, Michael A. Taylor’s return was nothing short of a blessing. It was also at the perfect time, coming during the stretch in which they played three games in about twenty-four hours, and help was so desperately needed.

At the beginning of the year, the starting outfield consisted of Jayson Werth, Adam Eaton, and Harper, with Taylor holding an important bench spot. After Eaton’s injury, Taylor slid into the starting center fielder’s role, and became part of the starting outfield, the inexperienced athlete to team leaders Werth and Harper. But now with all the injuries eating away at the outfield, Taylor is flanked by some combination of Andrew Stevenson, Howie Kendrick, and Adam Lind. Taylor, the anchor in the outfield, has become more important now than ever.

It wasn’t exactly his offense that’s sparked the team since he’s been back (we’ll leave the offense to Kendrick) — it’s his sparkling defense. During the second game of the doubleheader against the Giants on August 13, Taylor’s first full game back, he threw a strike to nab Joe Panik at the plate and made a leaping grab to rob Matt Moore. A few days later on August 16 against the Angels, Taylor made an even better diving catch in the gap. And in one of Taylor’s best catches ever, on August 18 in San Diego, he leaped up at the wall and took a home run away. If there’s one thing we know about Michael Taylor, it’s that he can play a mean center field.

And it’s not just flashy, we’ve got some numbers to back it up, too. He sports a fielding percentage of .994, better than the league average of .988 at the center field position. This year he has five assists, and only one error (in fact, in his entire Major League career, Taylor has only five errors). This year he also has 4 DRS (defensive runs saved), and 5.6 UZR (ultimate zone rating), which is above average. The only Nationals starter who has a better UZR than Taylor is Anthony Rendon (with 12.0!!!). Taylor has also made 62.5% of “unlikely” plays (plays with a 10-40% likelihood of being made) and 16.7% of “remote” plays (plays with a 1-10% likelihood of being made).

Taylor has matured remarkably this year, and he’s really grown into his role and become a leader on the field. There were a lot of people doubting Michael’s ability to stay in the big leagues, but ever since the injury to Eaton, Taylor has really stepped up his game, both defensively and offensively. Taylor is currently hitting .267, which is almost 30 points higher than his career average of .239. He’s also on pace to break his career high of 14 homers (he currently has 12). A little more plate discipline would serve him well, but for now, he’s really rounding into form.