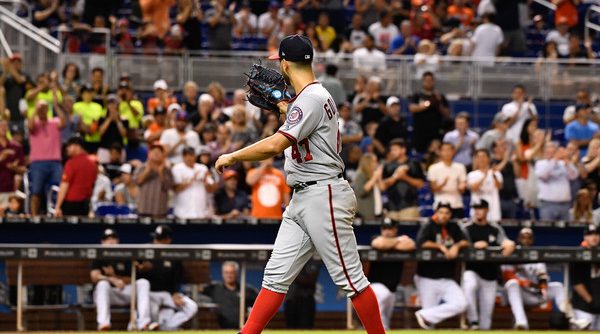 Ian Desmond returns to Nats Park for the first time as a visitor. The guy is still beloved here.

Desmond, though commemorated for his on-field exploits, is also remembered in DC as an active member of the community. In addition to his work to end neurofibromatosis, he was a founding board member of the Nationals Youth Baseball Academy. So, of course, his first stop upon coming home was a trip to the YBA facilities, accompanied by Anthony Rendon, Brian Goodwin, Gio Gonzalez, Max Scherzer, and Erica May-Scherzer.

2. Gio Gonzalez was a guest at the Nationals Ladies Night pre-game function. During his Q&A session he reinforced what the Nationals pregame video stated, saying, “Desmond will always be like family to us,” mentioning his trip to the YBA the previous day and his appearance in Bryce Harper’s wedding. Gio, however, touched on a wide range of topics after being introduced to a cacophany of screams. “I thought Justin Bieber was coming out… I’m pretty nervous right now,” he said. When asked who is the hunkiest National, he called Bryce a Calvin Klein Model. Gio even acknowledged what he calls a “split personality,” attributing it to his Latin heritage.

3. The Nationals held Ladies Night on Saturday, which included a panel of players’ wives (and one fiancee) during pre-game festivities. Heather Zimmerman, Erica Scherzer, Luz Perez, and Eireann Dolan all charmed and answered general and fan questions. Here are some of the most important takeaways:

Erica: Erica and Max’s baby is due in November, and maybe, if the fates align, will come into the world to the Nationals first World Series title. The couple already has quite a full family with four dogs, who Erica says Max goes to after good and bad games. Erica also has a lot of knowledge about hashtag sabermetrics and pitch sequencing from her days as a D1 softball player at Mizzou (where she met her husband) and from her family of baseball players. “There’s probably a lot of times Max wished I didn’t know as much,” she said.

Luz: Luz met Oliver Perez at church in Mexico on Christmas day. The couple now provides Christmas gifts for kids in Mexico as a part of their focus on charities that affect children so they can set a good example for the three of their own. When Luz married Ollie, she moved from Mexico to the US with new people, new language, no family, and no friends. Her first time watching Oliver play was in San Diego where she tried to search for her seats “behind a home sign” before her sister corrected her. “But it’s great to be married to him because I love him,” she said.

Heather: Heather talked about the restaurant (The Salt Line, across the street from Nats Park) she and Ryan have invested in. “We’re going to live in the DC area forever,” she said. But she also admitted to knowing “negative five about baseball” before she met Ryan. She never realized how often MLB teams played, asking Ryan if he’s “sure (he’s) actually traveling to play baseball.” When asked about the worst team to play, Heather responded that “The Braves are so awful with that chop,” to cheers of agreement.

Eireann: Eireann had already begun the process of endearing herself to Nats fans shortly after her fiance was traded to the Nationals on July 16, but furthered the process along by talking about mental health help for “bad-paper” veterans — or those who did not receive honorable discharges — as one of the causes near to them. She grew up with season tickets to White Sox games, but now is getting into hashtag sabermetrics so she “knows things Sean is bad at now.” And though the other panel members were emphatically anti-beard, she accepts it about Sean. “You want the beard. You guys haven’t seen Sean’s chin.”

4. Mike Rizzo’s addition of Sean Doolittle and Ryan Madson to the Nationals roster has meant a lot of things for a lot of people. For Austin Adams and Trevor Gott, the move meant a trip back to Syracuse. For Doolittle’s fiancee Eireann Dolan, it meant finding a new place to live in the midst of her grad school finals. For most Nats fans, it meant far less paper-bag-breathing after the seventh inning. But for Ryan Zimmerman, it meant getting the chance to play with a college teammate and get this sweet photo-op.

5. In 2016, Tanner Roark was dressed to the nines for a Nationals beer stein promo video. He, his teammates, and fans all got a laugh out of it. Recently, the Nats released its 90s night promo. The promo is a spoof of Saved by the Bell and begins with Zimmerman talking into a much larger phone than he is usually featured with in commercials, and he’s definitely not talking about texting and driving. Zimmy also gives us an eyeroll for the ages. The 30 second clip also features Rendon, Scherzer, and Trea Turner. It’s good. Watch it.