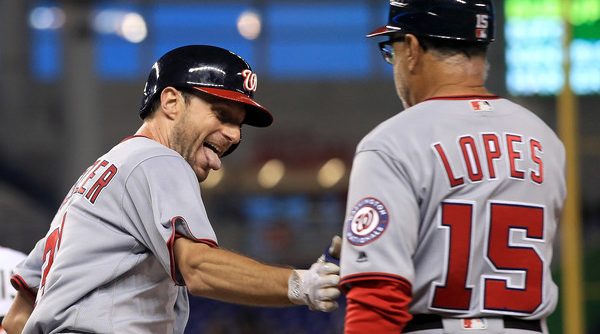 Three months ago, to think that the answer to this question could be anyone but Max Scherzer was silly. But of late, things have changed. The Nationals have three starting pitchers with the potential to win the Cy Young award. Scherzer, Gio Gonzalez, and Stephen Strasburg have all been pitching Cy Young-caliber ball, especially of late. They’re starting to be referred to as the “Three-Headed Monster.” If I had my way, I’d break the award into three pieces and give it to all of them to share.

But alas, the world doesn’t work that way. Only one can win the Cy Young, and here I discuss who of the three Nats starters has the best chance to beat out Clayton Kershaw, Zack Greinke, and each other for the award.

There are, however, a few things going against Max. His nagging stiff neck, which put him on the DL for the first time this season, shortened a few of his starts and caused him to miss some time. Scherzer also doesn’t have as many wins as one would like (just 14). This can be attributed to many factors, including missed time, the bullpen blowing leads, and the offense failing to score timely runs. Wins don’t tell the whole story, but they do look pretty and pad the stats. Additionally, Scherzer hasn’t been as dominant as late as he was earlier in the season. He had a really rough go last time

Additionally, Scherzer hasn’t been as dominant as late as he was earlier in the season. He had a really rough go last time out when he was trying to build up endurance for the postseason. It didn’t help his numbers and allowed the rest of the pack to catch up to him, but Scherzer is still one of the top dogs in the Cy Young race.

Gonzalez is having the best year of his career. Gio has been the Nationals’ most consistent starter this season, and all year he’s been up in the ranks in all the pitching categories. He ranks 4th in ERA (2.68), 11th in strikeouts (171), 7th in WHIP (1.15), and 5th in opposing batting average (.214). He’s on pace to have his career high in ERA and WHIP, and might set a career high in innings pitched. He’s also making life hell for opposing lefties: left-handed batters are only hitting .192 off Gio. Gio has also loved pitching at Nationals Park this season: his home numbers include a 2.28 ERA and a .218 opposing batting average; for a while, he had the lowest home ERA in the majors.

Most notably, Gio has learned to keep his cool, and he’s pitching a lot better in the clutch. In fact, his clutch numbers are sparkling. Batters have a .152 average with RISP, a .173 average with men on, and a .111 average with the bases loaded. Talk about shutting them down.

Gio is also blowing his career high in WAR out of the water. This season it’s 6.55, according to ESPN’s formula. That trails only Corey Kluber among pitchers and is better than both Scherzer (6.35) and Strasburg (5.48).

Along with Gio’s clutch stats, perhaps the most compelling aspect of his Cy Young case are his second half stats. Though he had an amazing first half, he’s gotten a little bit better in the second half, with a 2.40 ERA, a .205 batting average against, and a 1.04 WHIP. Gio might not be a dominating strikeout pitcher like his two teammates, but he’s having the year of his life, and there’s a good chance he could end up well-rewarded for it.

But what makes Strasburg a contender is what he’s done over the second half. His second-half ERA is 0.61, and going into Sunday he rode a 34 inning scoreless streak. Strasburg has been virtually untouchable since July and still hasn’t given up a run in September. He has pitched himself right into the Cy Young conversation, and if he keeps up this pace, he might even become the frontrunner.

Unfortunately, 3/5 of the Nationals rotation cannot collectively win the Cy Young. But they all have the skills and ability to be able to win it. Scherzer has the track record, Gio has the consistency and the career year, and Strasburg has the full head of steam. Realistically, at this point, Scherzer probably still has the best chance of bringing that award home because of the fact that he’s number one in a great number of categories. But Gio and Strasburg should not be swept under the rug.

All three have had amazing seasons, and there’s a chance the three of them could place first, second, and third in whatever order. There’s an even better chance of all of them being in the top five. Other than Kershaw and Greinke, I’m not sure who else would be in the conversation. Nonetheless, there’s a pretty good chance a National goes home with the Cy Young yet again this year.