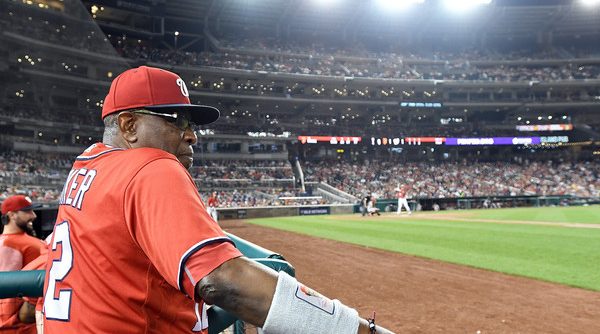 As September arrives, we are blessed (or cursed, as some curmudgeonly baseball analysts will argue) with expanded rosters. This allows ball clubs to call up additional players from the minor leagues–whether to help relieve injury and fatigue, to rejoin the club after an earlier stint, reinstate from injury, or reward for having a good minor league season–without worrying about the 25-man roster constraint. Some managers abuse this power more than others, but if used right, the extra roster flexibility can help a team on its way to the postseason.

However, the extra roster space wont last for long. Though we have all these extra players running around now, come October, the rosters will shrink back down to 25. The Nationals made a number of call-ups at the beginning of the September, including players making their return from the DL and some fringe players rejoining the club. But the big question looms in the air: who’s going to make the postseason roster?

Some of the roster spots are obvious: Ryan Zimmerman, Daniel Murphy, Trea Turner, Anthony Rendon, Michael A. Taylor, Jayson Werth, Matt Wieters, Max Scherzer, Gio Gonzalez, Stephen Strasburg, and Tanner Roark all have spots on the roster. Bryce Harper is still injured, but for the purpose of this article we are going to assume he comes back in time for the postseason and claims a roster spot. That leaves 13 spots for the bench and bullpen, all of which are up in the air at the moment. I’m going to discuss who are locks, who will likely get a spot, and who will be left off the list.

Lobaton gets a spot because he’s been the backup catcher all season and is intimately familiar with the pitching staff. He won’t provide much offense and should never get the start over Wieters, but he’s the contingency in case something happens to Wieters or a pinch runner needs to come into the game.

Lind has proven himself invaluable since day one. He has some of the best pinch-hitting numbers in the league, and can also start, if needed, at both first and left. His numbers as a non-starter include a .341 average, 15 hits in 44 at-bats, 3 home runs, and 12 RBI.

Kendrick has been a sneaky mid-season pickup and has provided an important boost for the team. Since joining the Nationals, he’s hit .317 with 5 home runs and 21 RBI in 32 games. He can play both the infield and the outfield, which could be incredibly important if Harper doesn’t return in time. In my mind, Kendrick starts in left if Bryce isn’t ready.

The so-called law firm of Kintzler, Madson, and Doolittle all get spots, no questions asked. Their arrival turned the bullpen around from something atrocious to a formidable weapon. Since joining the Nationals, Kintzler has a 2.93 ERA and a 1.17 WHIP. Madson has a 0.00 ERA and a 0.60 WHIP. Doolittle has a 2.70 ERA, a 1.10 WHIP, and 14/14 saves.

Though Difo didn’t spend all year with the club, he has made a big impact this season and has a strong case for making the postseason roster. In all likelihood, he should make it, but given how young he is, there’s no guarantee. Nonetheless, Difo is putting up the year of his life: he’s hitting .285 with a .337 OBP, 20 RBI, and 43 runs scored in 100 games. He filled in brilliantly during Turner’s absence, playing a gold glove-caliber shortstop, posting a 3.6 UZR (ultimate zone rating) and 14 DRS (defensive runs saved) (and for those of you unfamiliar with those stats – that is very good).

Grace was a bit of a pleasant surprise for the Nationals. He got called up in the middle of the year and managed to stick around because of his versatility. He can be your long man and eat up innings, he can make spot starts, and he’s a lefty who can be put into the game to shut down a big lefty if needed. His ERA currently sits at 4.60, which isn’t the greatest and might diminish his chances of making the roster, but he’s more valuable than his numbers will lead you to believe.

Jackson was a light in the dark when Joe Ross’s season came to an abrupt end. In nine starts so far with the Nationals, he has a 3.29 ERA with a 1.20 WHIP. Though he likely won’t make any starts due to the typical four-man postseason rotation, he’s pitched well enough to earn himself a spot in the bullpen. He has experience both pitching from the bullpen and pitching in the postseason (including a nice, shiny World Series ring in 2011), and he could make a valuable bullpen piece.

Albers has been arguably the Nats’ most consistent reliever all season. While the late innings aren’t for him, he’s proved himself reliable in the bullpen. He has an ERA of 1.74 and a WHIP of 0.91, and has proven he get get out of sticky situations.

Perez is one of the few relievers who was on the team last year, and one of the few lefties. He’s been pretty consistent all year long and is best used as a lefty specialist. His season ERA sits at 3.34, and his WHIP is 1.15, easily good enough for a postseason spot.

For me, Goodwin gets a spot on the bench if he’s ready to come back from injury. He did a remarkable job filling in while Werth and Taylor were on the shelf and almost single-handedly kept the outfield anchored down. In 74 games, Goodwin hit .251 with a .313 OBP, along with 13 home runs, 30 RBI, and 41 runs scored. He has more than earned his roster spot, but it all depends on his injury. If he’s ready, that spot should be his.

On my list, Blanton is my last man in. There are a number of bullpen arms to choose from, and in a surprising turn of events, he looked like the best option. Let me list my reasons: he has postseason experience. His career postseason ERA is 4.66, with a career NLDS ERA of 1.72, not to mention a World Series ring in 2008. Additionally, he’s been relatively consistent. He’s been healthy all year, which is a rare feat for a National this season. And since the trade deadline (and the bullpen reconfiguring), his ERA is down to 3.86 with a BAA of .212. So he has a case. He makes it onto the roster, but barely.

Drew, Raburn, and Glover have had their seasons eaten up by injuries. Even in the off-chance that they return from the DL in time, they likely won’t have their timing and feel back, and there are others more capable of producing in the postseason.

Severino is the emergency emergency catcher, and he’s called up the second something goes wrong with Wieters or Lobaton. The fact that he has some postseason experience helps his case, but chances are he’s not on the roster.

Cole and Fedde are your emergency starters in case the worst happens. They’re too young and inexperienced to make it onto the roster initially, and Fedde is injured anyway.

Solis, Kelley, and Romero have had unimpressive seasons. All of them have potential to make the postseason roster, and they likely could if the Nationals make different choices than me, but in my opinion, others deserve it more. All three of them have spent time on the DL this season, and all of them have under performed when they were healthy. Solis has a 8.35 ERA, Kelley has a 7.15 ERA, and Romero has an ERA of 3.88 with a WHIP of 1.46 and a BAA of .260. Romero has the best chances of making the postseason roster, but in my opinion, all three of these guys remain on the shelf.

If Harper or Goodwin are unable to return in time, likely roster replacements include Andrew Stevenson and Adrian Sanchez.

The likelihood of the actual roster looking exactly like this is low, as Dusty and crew are likely to make some different choices, and return from injury could alter the field. But the road to the postseason is coming to its end, and some choices are going to have to be made. Here’s to hoping that the best possible crop of players is able to take the field for the playoffs.