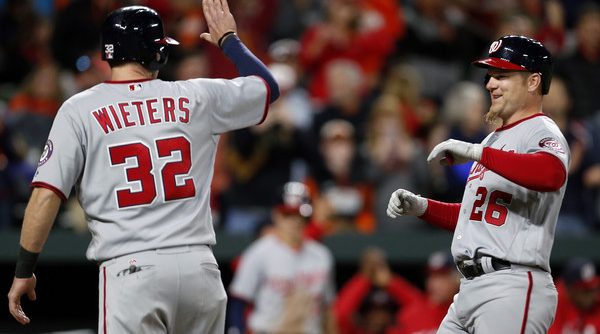 Mike Rizzo might have a new strategy when marketing to potential free agents. “Have you been treated poorly by your current, team? Well, you might want to consider joining the Washington Nationals!” This week, Matt Wieters walked off his former club. Through the first three games of the contrived “MASN Cup,” which carries about as much weight as the Mystics Attendance Banners, Wieters has put together a sparkling .385/.429/.462 slash-line. He is carrying on what has become a fine Washington Nationals Tradition: beating your former club in fun and torturous ways.

When Jayson Werth signed a 7-year, $126 million deal in the winter of 2010, critics had a field day. The contract was widely panned; none more so than Phillies fans deriding him for “taking money over winning.” That first year of the contract looked like the critics were right: Werth slashed just .232/.330/.389. Against the Phillies, he would hit a paltry .228/.258/.333. The next year Philly Fans showed their true colors, cheering and taunting Werth’s wrist injury. Werth vowed to do everything in his power to “make sure those people never walk down Broad Street in celebration again.” And he did.

Werth owns an All-Star level .277/.354/.496 slash line against his former club. There are few places he enjoys more than hitting at Citizen’s Bank Park, posting a .918 OPS. He’s hit 22 career home runs against the Phillies — the most of any team he’s faced. He has the most home runs of any opposing player in Philly since 2011 with 15, and his last three  multi-homer games have all come at the expense of the Phillies. He has outlasted and outperformed all of the players Philadelphia chose to retain over him: Ryan Howard is out of baseball, same with Jimmy Rollins; Carlos Ruiz has struggled since 2013, and is currently hitting .129. Chase Utley is known more for his eponymous, inconsistently enforced rule than anything he’s done at the plate — hitting just .183 in LA. Meanwhile Werth just continues to do what he does best. This year—the year the Nationals were supposed to regret signing Werth –he is continuing to terrorize the Phillies, with another 2-homer game, in a series in Philadelphia. I think he likes boos.

While much less acrimonious, Max Scherzer has a nice piece of history against his former club, the Detroit Tigers. The best pitcher in baseball not named Clayton Kershaw, it is funny to think Max has improved since singing a $210 million mega-contract in January, 2015. In five full seasons in Detroit, he accumulated 21.6 WAR—in slightly over two years here, he has totaled 13.1 WAR.  On the night Jordan Zimmermann returned to Nationals Park, Max Scherzer stole the show. A masterful performance, Max joined a select few in striking out 20 batters in a game. This one was particularly interesting, throwing 96 of his 119 pitches for strikes. Max had almost as many balls (23) as he had strikeouts (20). Max’s former teammates were helpless against him.

But neither Werth nor Scherzer can compare to the brutality of Daniel Murphy facing the Mets. On Christmas Eve, 2015, Murphy signed a three year, $37.5 million deal with the Nationals. While the New York Post would take a similar condescending stance as Philadelphia media and fans’ towards Werth, the result was even more satisfying for the Nationals. In what can only be qualified as a “warm reception” in New York, the majority of Mets fans cheered him in his return to Citi Field. Once hailed as a hero — belting seven home runs in helping the Mets make, and ultimately lose the World Series in 2015—Murphy would quickly become a villain.

Unlike Werth, Murphy’s revenge was quick. In his first series back, Murphy would go 4-for-11, a double, home run and 3 RBI, taking two out of three in New York. It would get worse for the Mets from there. June 29th, 2-for-4, 2 home runs, 3 RBI; July 7th, 3-for-5, a home run, 3 RBI; July 9th, 3-for-4, double, home run, 4 RBI. That quasi-warm greeting in May, turned to pure hatred at a level only generated by New York and Philadelphia. Murphy would help the Nationals dominate the Mets, winning 12 of 19 — including 9 of the last 13 games—and win the NL East by 8 games. His slash line that year versus his former club: .413/.444/.773; with hits in all 19 games. The New York Post would quickly change their tune. Those that were unafraid to see him go openly pined for him to leave them alone.

The Mets traded for Neil Walker, all but ignoring his injury history, while Murphy was still unsigned — essentially telling Murphy “thanks for the 2015 post-season, but we’re good now.” Walker would play in 113 games in 2016. He would post a good stat line for the season, however, those numbers were inflated by an incredible April and August. The rest of the year, he was inconsistent to terrible. This year, he’s just terrible, batting just .218/.298/.347. I mention Neil Walker for a reason. While Werth revels in his tormenting the Phillies, Murphy takes the high road, saying beating a division rival is important, but it’s nothing personal, yadda, yadda, yadda. Aw shucks. Max Scherzer has a different take: “He wants to beat their brains in.” The ultra-competitive Murphy has made it a mission to club the Mets at every opportunity — meanwhile maintaining his typical low-key demeanor. The New York media seems to agree letting Murphy go was a mistake. All that is really left for Mets fans to do is post sad, baseless PED accusations on Twitter.