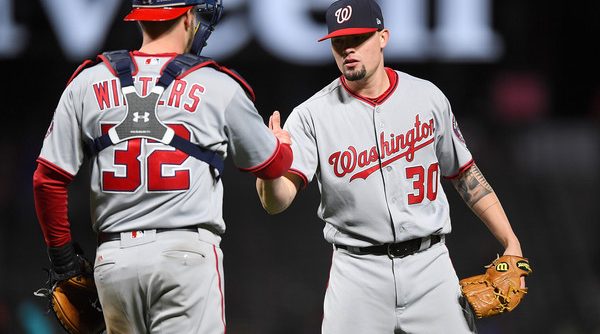 As the Washington Nationals’ bullpen is no longer the baseball equivalent of the RMS Titanic, now seems like a fine time to look at the bullpen roles moving forward and if there are any glaring holes that Mike Rizzo needs to address. In today’s advanced statistics era, I would rather not have to discuss set roles for the reliever. With a highly traditional manager at the helm, however, it is unavoidable that that is how this pen will be designed. Starting with the highest leverage situations, let us begin.

There really is no debate about there anymore, right? Many will cite temperament and “killer instinct” for Blake Treinen’s failure and Glover’s success in the 9th inning role. I think there is something to that, but I prefer to look at Glover’s 98 mph cutter, 92 mph slider, and an ability to actually throw the ball in the strike zone. For as good as “Koda Bear” has looked over the last couple weeks, there is still a reasonable chance that by the time the trade deadline passes there is a newcomer in the closer role. If nothing else, Glover has relieved (pun intended) the tension on Rizzo to make a late spring move for a closer at a highly-inflated price.

During spring training, you would find Nats fans debating how Glover, Treinen, and Shawn Kelley would divvy up the last three innings. Yet here we are, a third of the way into the season, and those 7th and 8th innings roles belong to a guy that Rizzo took a low-cost chance on and a non-roster invite who was cut out of West Palm Beach before being signed to a minor-league deal.

Albers has really earned the right to pitch in big spots and has been the team’s most consistent reliever since he was called up on April 9th. Romero has been up and down, but has proven to be Dusty’s preferred lefthander after the injury to Sammy Solis. With his ability to hit triple digits, Romero could hold onto the role even when Solis returns. Both of these guys are quite likely to be displaced by a trade, shifting Albers down to a 6th / 7th inning role and Enny to an even more matchup-centric job. Of course, if you ask Andrew Flax, Romero should pitch whenever possible when the team is on the road. (Editor’s note: #RoadEnny is real!)

This spot is all but locked up by the former first rounder, and rightfully so. Unless leadership decides that they cannot stomach the current version of Joe Ross and send him to the pen, with Turner the likely internal replacement, then it is hard to see this role changing. His consistency and ability to limit runs in multiple innings is not talked about enough, what with plenty of other storylines out of the nation’s capital, but Turner has gone about his business and finally seems to have found his place in the major leagues.

How the mighty have fallen. From the most trusted guy in late game situations with men on base in 2016 to the least trusted man in a maligned bullpen. Confidence is key for relievers, and for the most part, Blake has had just about none. Treinen is a first-class person and a team player, so we are all rooting for him to figure it out. If he does, his upside this year seems to be rekindling his previous role of being the guy who is most likely to force a double play ball. Until that happens, he won’t be pitching in many close games anytime soon.

In the past few days, the LOOGY (Lefty One-Out GuY) has been Oliver Perez. I don’t buy that he now holds that spot moving forward for a few reasons. First, Dusty Baker really does not like Oliver Perez. He is the least used member of the pen that has been active the entire year (11 1/3 innings), and Dusty does not seem to care if he goes a week or more without throwing. Second, I firmly believe the only reason that Perez threw this week against the Dodgers is because LA cannot hit ANY lefties, regardless of their actual talent level. That was smart use of resources by the manager, and nothing more.

So who will take the role? As I said before, there is a chance that Solis gets the setup role and Romero moves into this spot. Neither Romero or Solis are suited for this position, though: Romero has fared far better against righties this season, and Solis has pitched equally well against both sides of the plate in his career, making him more valuable as a whole-inning reliever. That leaves one good option: LOOGY via trade. One guy to keep an eye on is Padres lefty Brad Hand. He would be on the expensive side of things, with a 1.69 ERA, 11.81 K/9, and a 0.91 WHIP, but the price would justifiable for a team in win-now mode. Hand will be highly sought after, naturally, so acquiring him would come with the added benefit of keeping him away from a potential rival.

Even though they are not occupying a traditional spot, not all of these guys are in comparable situations. Kelley has really fallen out of favor after being the team’s best pen arm in 2016, mostly because of his inability to keep the ball in the yard: 4.80 HR/9, well over last year’s mark of 1.40, and a 6.00 ERA which is the highest of his career thus far. While I think he will improve, I cannot help but wonder if he has lingering issues stemming from that scary moment with his throwing elbow in Game 5 of the NLDS. With him so recently removed from being the Nats best reliever, I think he has a few more chances to prove he can be counted on, but he needs to figure it out soon.

The same cannot be said for Joe Blanton, who has been the biggest disappointment in Washington this season. Unable to recreate his supreme form from 2015-2016, his ERA sits just below 10 and has been more homer-prone than even Kelley. Unless the injury bug hits, it would not be surprising if Blanton does not pitch another inning in a Nationals uniform.

Solis is far more intriguing. He will hopefully be back soon, and one would expect him to enter the fray immediately. It remains to be seen how he will be used, but I would expect to see him used earlier in games to get back into a rhythm. One side effect of Solis returning is that someone would likely be removed from the pen. That guy could very well be Perez, who with his limited usage makes no sense to continue to roster. Health from Romero and Solis, and the addition of a LHP would all but guarantee an end to Perez’s time with Washington.

Any, or potentially all, of these minor leaguers could see time in an effort to strengthen what is still the biggest weakness of the NL’s best team. Fedde especially so, because shifting the top pitching prospect in the system to the bullpen only makes sense if he contributes to the big-league squad at some point this summer. He very well could be the first man up in event of an injury to a right-handed reliever.

The roles above could certainly chance at any time, but as it stands, they likely won’t shift too much until Rizzo brings in some talent from outside the organization. Even with recent improvements, and an especially strong effort in Los Angeles, Washington has an overall bullpen ERA of 4.99, second only to Minnesota for worst in baseball.