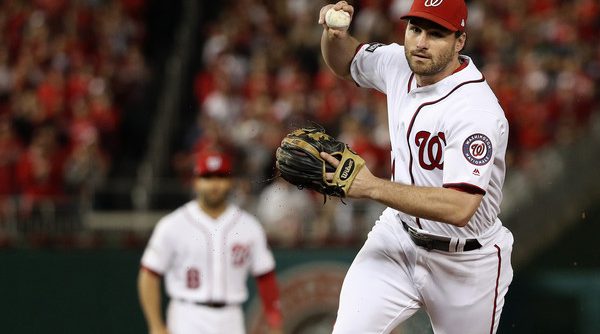 While most players go through slumps and hot streaks during the season, Daniel Murphy just plain hit in 2016. He hit for average. He hit for power. He set the table. He was clutch. Though he was the Nats’ backup plan at second base before the 2016 season, he ended up being in the conversation for the National League MVP at its conclusion.

The Nats Blog already covered all the famous changes to Murphy’s swing. I would recommend going back to read that post if you want to know more about the specifics of the changes, but the signs of sustainability identified mid-season continued through the rest of 2016. Murphy continued to hit the ball hard. He still pulled the ball more than ever and in doing so cut down on groundballs in favor of more line drives and fly balls. Though his walk rate was still below average, his strikeout rate was half that of the major league average. The results speak for themselves: a .347 batting average, 25 home runs, 5.5 WAR and an overall batting line 56% better than the league by wRC+. Those changes to his swing are here to stay and the results are sustainable.

Case closed then? Murphy will again hit close to .350 with 20+ home runs? Perhaps, but opposing pitchers have some tools to work with. Murphy still has a small hole in his swing on the inner half of the plate. Luckily for Murphy, that is a very difficult spot for pitchers to consistently hit. And if a pitcher misses his spot only slightly, Murphy is ready to pounce. So if opposing pitchers want to attack Murphy, look for them to take advantage of Murphy’s pull-centric approach by staying outside with off speed pitches. In fact, opposing pitchers started doing that against Murphy in 2016. He saw fastballs only 58% of the time in 2016, the lowest rate of fastballs faced in his career.

But the most effective tool in combating the new and improved Murphy may have nothing to do with the pitcher. Expect to see opponents shifting against Murphy much more often and to much more of an extreme. Against a traditional defensive alignment, Murphy hit .356 with an OPS of .838. Against the traditional shift, Murphy hit .354 with an OPS of .827. Wait a minute! Those are nearly identical lines. This is true, of course, but traditional shifts don’t stop Murphy. Non-traditional shifts, though, do. Against these more extreme alignments, Murphy hit only .300 with an OPS of .614. Sure, that’s a high batting average still, but it drastically cuts down on Murphy’s slugging output. Murphy’s bat-to-ball skills are so good it’s hard to keep him from hitting for a high batting average but opposing teams can cut down on his power by aligning their defense to counteract his new approach.

While it’s hard for opponents to take the bat out of Murphy’s hands, Murphy has to drop the bat and pick up the glove at second base for the Nationals. And the results are not nearly as pretty in the field as they are at the dish. By UZR Murphy rated out as the third-worst defensive second baseman in baseball in 2016. By DRS, he was tied for the worst defensive player at the position. Murphy’s struggles are pretty easy to identify. He’s very good at handling balls hit right at him. His lateral quickness leaves a lot to be desired, though, and he really struggles to get to balls hit to his left or right. On top of that, the Nationals won’t have Danny Espinosa at short to help make up for Murphy’s lack of range. Trea Turner will be settling in to his first full year of playing shortstop at the MLB level next to Murphy, and he likely won’t be able to help with Murphy’s struggles.

That poor defense will have an impact, but the expectation is that Murphy’s bat will more than make up the difference. Pitchers are going to experiment to see if they can find a way to attack Murphy. I have my doubts whether pitchers can stop Murphy. They can only hope to contain him.