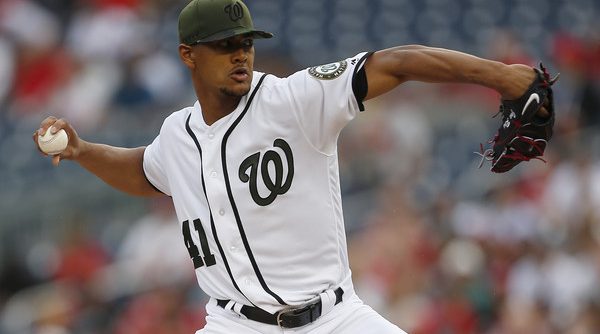 Right now, the Nationals are running away with the NL East. They are in the enviable position of not having a real competitor, currently sitting a comfortable 11 games up. The Mets are the closest thing but cannot stay healthy and cannot get out of their own way. In fairness, they won that game, but wow, that was bad. Since Max Scherzer lost to the Braves on May 20, lasting just 5 IP on 106 pitches, the Nats have won nine of 11. Max has pitched 17.2 IP in his last two starts — one out away from consecutive complete games. In fact, just twice has a starter failed to pitch into the seventh inning — Joe Ross, who lasted less than five against the lowly Padres, and Gio Gonzalez, who posted 5 1/3 IP against the Mariners.

This reduced workload has helped the bullpen rebound over that stretch too — they have surrendered just three runs over their last 20.2 IP, with 6.97 H/9, 2.41 BB/9 and a solid 9.14 K/9. The offense is still hitting in fits and spurts, posting just a .236 aver with RISP before going 7-for-13 in Oakland Friday. This is nothing more than a natural down turn after a blazing start. Anthony Rendon is hitting like he never has before, Daniel Murphy’s bat has awoken, and Trea Turner is showing signs of coming around. The Nats have a very good team. But as they say, he who hesitates is lost; there is never a bad time to talk improvements. There should be a plethora of players available to fix the Nats’ woes leading up to the July 31 non-waiver deadline

Recently, the USA Today listed 25 players most likely to be moved at the deadline. Players like Gerrit Cole and Sonny Gray are going to be cost prohibitive for a prospect conscious GM like Mike Rizzo. But one can dream right? Imagine throwing Cole or Gray in as a fourth starter? Or adding Marcell Ozuna or JD Martinez to the middle of this lineup?

…Ok, back to reality. More realistically, Rizzo will make less heralded deals that net useful pieces, not an earth-shaking trades like the Chapman or Miller deals, or even the Eaton deal of the offseason. With Killer Koda Glover stepping into the closer role and really putting his stamp on it, a reliable reliever or two, preferably left-handed who also can also close, would probably be the top targets at the deadline. The USA today article has the usual suspects in lefties Brad Hand of the Padres and Tony Watson of the Pirates, plus righty Ryan Madson of the A’s. I think Madson is the top candidate there — he has won two World Series, and has a 2.91 post-season ERA. He has a sterling 12 K/9 rate in the playoffs. He is not fazed by the pressure and would be able to help some of the others relievers out — something this team has lacked. Yumerio Petit is the only reliever the Nationals have ever had on the postseason roster with a ring. While Hand would be a good second choice, he walks too many people—3.6/9, as opposed to 1.8/9 for Madson. Watson is a firm no — he is posting a Papelbon-like 6.9 K/9 vs. 3.1 BB/9, with a 5.14 FIP.

Overlooked in the reliever discussion is the Tigers bullpen. They have three pitchers having very good years — albeit not without their flaws. Left hander Justin Wilson is the best there — even with a 1.2 HR/9. His 0.864 WHIP is fantastic, as is his 14.3 K/9. After Justin Wilson, there are Alex Wilson and Shane Greene. Both these righties have a sub-1.90 ERA with some flaws: Wilson only K’s 5.3/9, Greene walks 4.0/9. Both have very good WHIPs, posting 0.917 and 1.176 respectively. Greene only gives up 0.4 HR/9. I also would not mind bring back old friend Marc Rzepczynski, who is having a very good season.

The fifth starter spot is concerning, as well. Ross was great in his first start back from AAA, only to be non-competitive against a woeful Padres lineup. Assuming health, the Nationals can trot out Max, Stephen Strasburg, Tanner Roark and maybe a start here or there from Gio Gonzalez in the playoffs. Ross is concerning. He needs to show some kind of consistency before the deadline. However, the starting pitcher market is expensive. Cole and Gray are going to make Miller and Chapman look cheap. The main problem with acquiring pitching from bottom-feeders is, their pitching is awful. There are not many solutions to this area. As the USA Today article points out, Jason Vargas is having a very good year, and hasn’t been terrible over his career. He would make a viable option. The others either are struggling this year, like Jose Quintana, or are going to be astronomical in terms of cost, or both. The caveat here: Rizzo has never acquired a starting pitcher at the trade deadline, at least not as a contender. In 2010, he acquired Ryan Tatustsko and a little known throw in named Tanner Roark, for Cristian Guzman. Typically, the cost of doing business in the starting pitching market is too high for someone who values prospects as much as Rizzo does. The Nats can get by with a conglomerate of Ross, Turner, et al, until the post season.

As for the offense, Michael A. Taylor has been a great story. His combination of speed, power, and defense gives one visions of an Adam Jones. Defensively, he’s been terrific. However, he walks 5.8% of the time while striking out 34.3%. That’s not a good combination. Worse yet, those numbers are trending downward each year since the start of his first full year in 2015. I’d love to see the Nationals go get Lorenzo Cain, again, if he’s not too expensive. He is a better defensive centerfielder than Taylor, and, he may not have Taylor’s power, he does boast 11.2% walk rate, with just a 16.8% K rate. Having Taylor, even batting 8th, and striking out 35-40% of the time, like Espinosa did last year, is a killer in the playoffs. Cain batting 7th in front of Matt Wieters makes this line up that much longer. What makes this particularly convenient is Cain is a free agent at the end of the year, which wouldn’t cause complications with Eaton’s return next year.

The other part of the Nationals offense that is lacking is the right-handed bench. The Chris Heisey injury leaves the Nationals with just Wilmer Difo as a RHH, and he is a switch hitter. Acquring someone like Cain will not help the situation either, since Taylor would not be an ideal pinch hitter. This is a particularly difficult area to address, since pinch-hitting is one of the most difficult aspects of the game. May every-day regulars struggle in that role. Although he’s an infielder, picking up someone like Aaron Hill from the Giants would help. In his career, he has a .351/.420/.500 slash-line as a pinch hitter, over 155 plate appearances.

This is a fun time of year, with the Nats cruising to their fourth division title, and about to go shopping for additional pieces. Personally, I love the rumors swirling in July about who is going where. One thing is sure, Victor Robles will be in the Nationals organization post July 31—Rizzo has shown a reluctance to part with his top prospect, except for a bonafide star. I’d also be surprised to see Juan Soto moved, as reports have him as one of the best hitting prospects in the minor leagues. Rizzo has a penchant for getting quality at pennies on the dollar. It will be interesting to watch the next couple of weeks unfold!